Here at World Words, we don’t simply sit at our desks and conjure up ideas of far-flung places. We actually go and visit them. At any one time you’ll find our travel writers exploring pretty much every corner of the world. And when we do return to our desks, we love to share the tales of our adventures with the readers of the World Words blog.

That’s why we created the Our Travels blog series. So far, we have covered everywhere from Vancouver Island in Canada to Orccha in India, from Guatemala to Dubai. This month, it is the turn of editor-in-chief Joe – whose many previous pieces include Oman, Belarus and Iceland – to recall his most recent trip to the Republic of The Gambia. 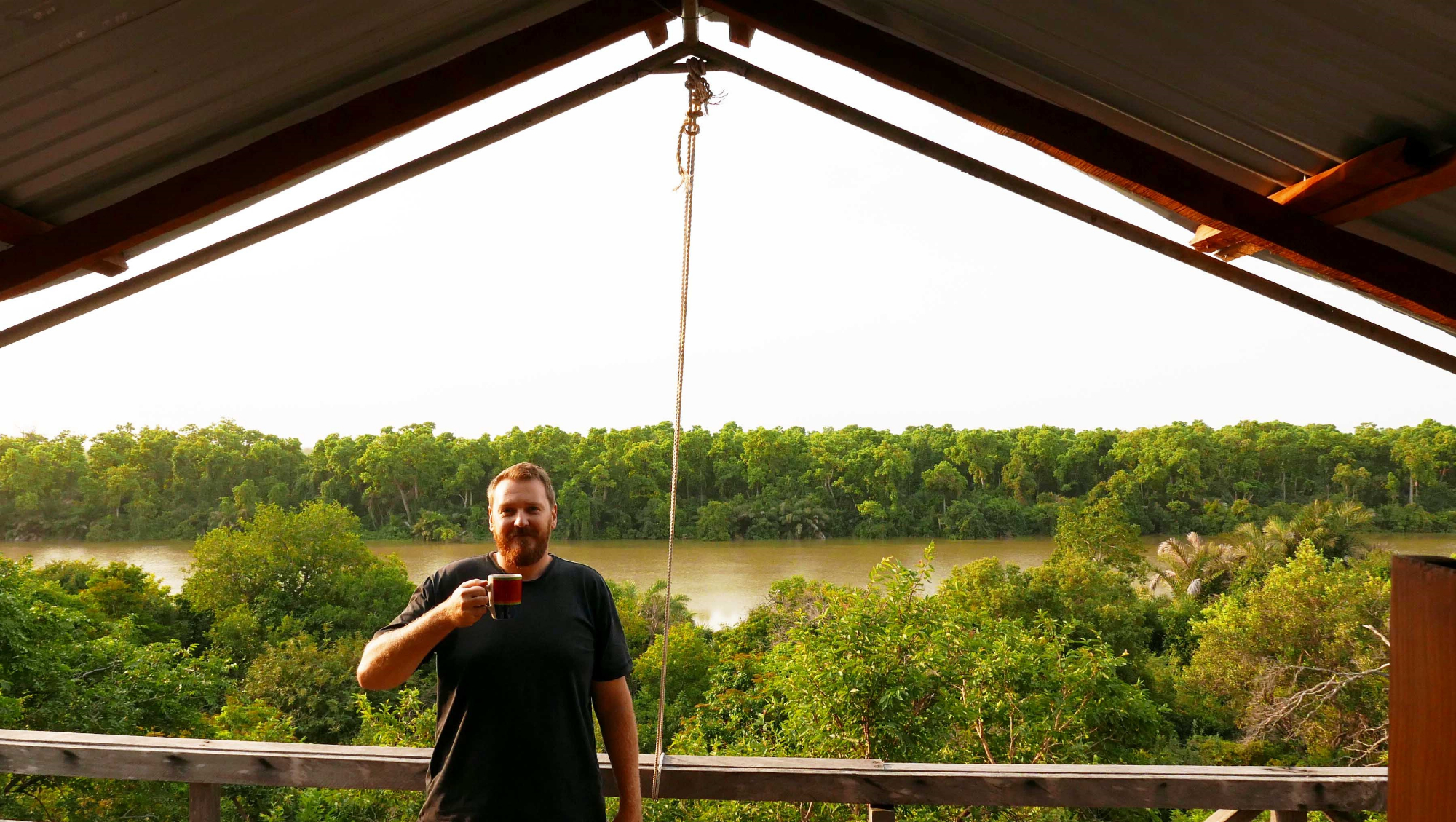 Joe outside his safari tent, with views of one of the Chimpanzee Rehabilitation Project islands.

Why I went to The Gambia
The Gambia ticked an awful lot of boxes. I’d allocated one week for a solo trip in early November, and it was small enough to explore pretty thoroughly in seven days. It was also seemingly ideal timing – just after the rainy season yet just before peak tourism. At an average of 32°C, it’d also provide warm respite from the burgeoning European winter. And with a majority English-speaking population, it looked to be an easy option for independent travel. On a personal note, it also offered me the opportunity of my first foray into West Africa. How could I possibly say no?

My highlight of the trip
Without doubt, the highlight was the Chimpanzee Rehabilitation Project. You’ve probably heard of Lucy, the chimp who was brought up as a human child in the 1970s – she learnt to dress herself, serve tea and even communicate using sign language. At the age of 12, when she’d become too strong to be kept among humans, she was sent to a new life in Gambia, under the care of psychology student Janis Carter. 40 years on… and Janis is still there. The wildlife reserve she set up for Lucy has expanded to a collection of three islands on the River Gambia, which are home to more than 100 chimpanzees. And it is now possible to visit – and stay in – the reserve. I spent two whole days exploring (both on foot and on guided boat tours) the amazing local wildlife, not only chimps but also hippos, warthogs, pelicans and lots more, while staying in a beautiful safari tent on the banks on the river. It was magical.

What else I love about The Gambia
Most visitors to The Gambia do not stray far from the west coast. Despite a wealth of upriver attractions, from the island-dwelling chimps to ancient stone circles, it’s understandable. The vast majority of the country’s higher-end hotels, restaurants and bars are near to the coast, whereas a trip upriver tends to come with very basic food and accommodation (usually without electricity, let alone Wifi or air conditioning). The coast also offers plenty of great nature reserves such as Kachikally Crocodile Pool and Tanji Bird Reserve. But, mainly, it boasts beautiful beaches.

My personal coastal highlight was Jinack Island, part of Niumi National Park on the north Senegal border. It wasn’t easy to get to – I had to take a ferry from Banjul to Barra, then hike for 90 minutes through thick forest (including wading through some streams) – but the reward was a long, idyllic and entirely deserted stretch of sandy beach. 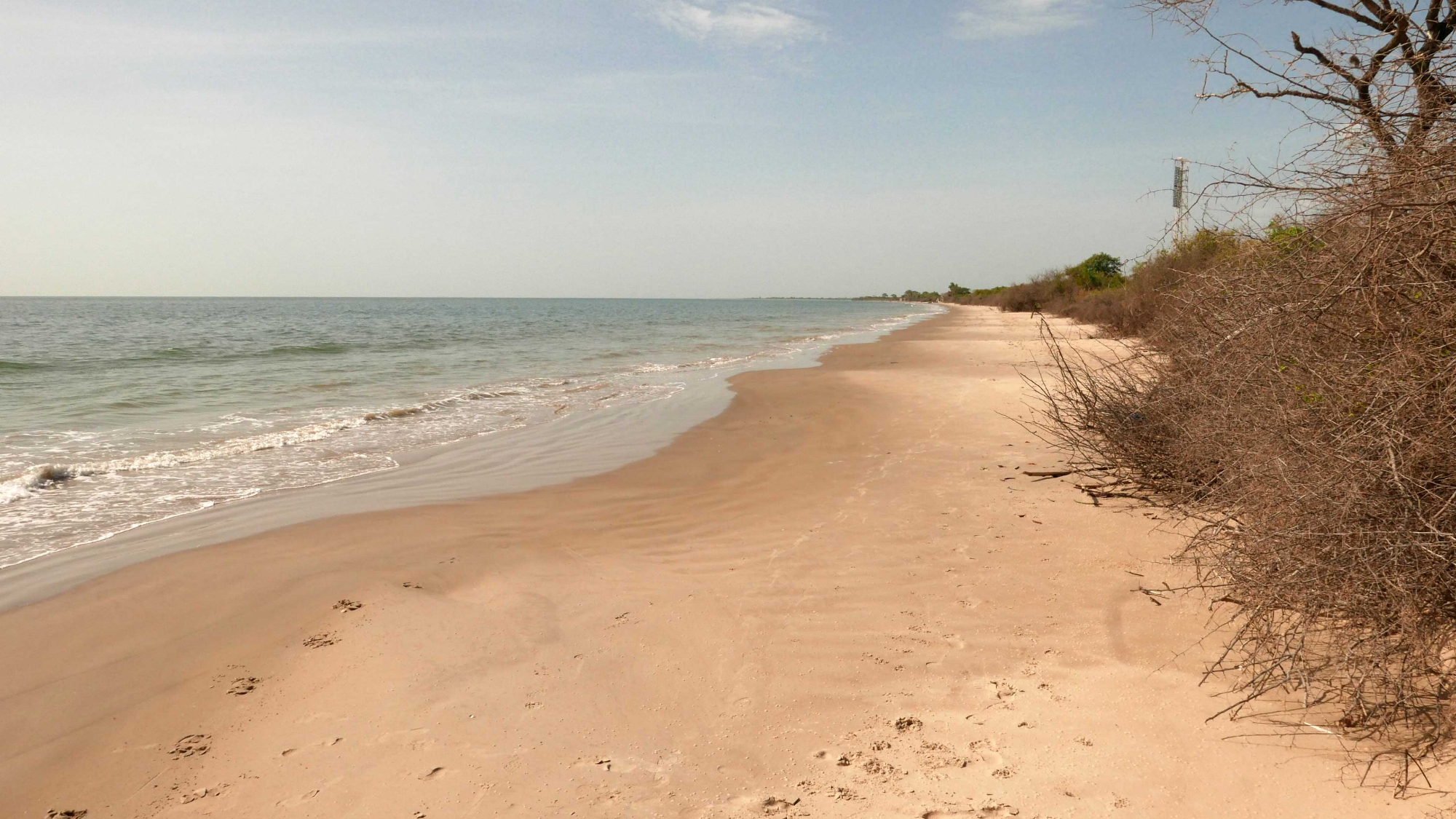 The lovely beach at Jinack Island – which Joe had all to himself. It’s part of Niumi National Park.

Why you should go
If you’ve not previously travelled to Africa, The Gambia could be your ‘gateway drug’ to the continent. It is packed with so many typically African delights – from the smiling people to the amazing wildlife to the unbeatable sunsets – but with a level of comfort, safety and simplicity that is less common elsewhere. And with English as the official language, it’s also a far easier place to visit for English speakers than, say, neighbouring Senegal. Plus… well… all the reasons already mentioned! Once you have visited Gambia, you’ll be dying to have other African adventures.

How you can visit
Banjul International Airport has regular flights from Europe. Vueling and Brussels Airlines have scheduled services, and there are plenty of Thomas Cook charter flights during high tourist season. Once you are in The Gambia, you can travel in comfort with private taxis, or get around like a local using gelly-gellies (run-down minibuses that leave when full to the rafters). With the latter, you can get from one end of the country to the other for under £5 ($6.50).

You can read a handful of examples of the travel content we’ve written on African destinations by visiting our projects page. And don’t forget to follow us on Twitter to keep bang up to date with all the latest travel news.

4 thoughts on “Our Travels: The Gambia”