First, we took you to the remote chilly outcrop of Isle of Harris, Scotland. Then we experienced the Mediterranean charms of Corsica, France. Next, cultural Quebec, Canada and fun Dubai, UAE. Now, for our fifth and final (in 2016) Our Travels blog, we are heading back to Europe to the far northern hotspot of Reykjavik and Southwest Iceland.

Our editor-in-chief Joe recently visited Iceland on long weekend break, staying in the small town of Hafnarfjordur, just outside Reykjavik, and exploring the southwestern corner of the island. Scroll on down to read his thoughts… 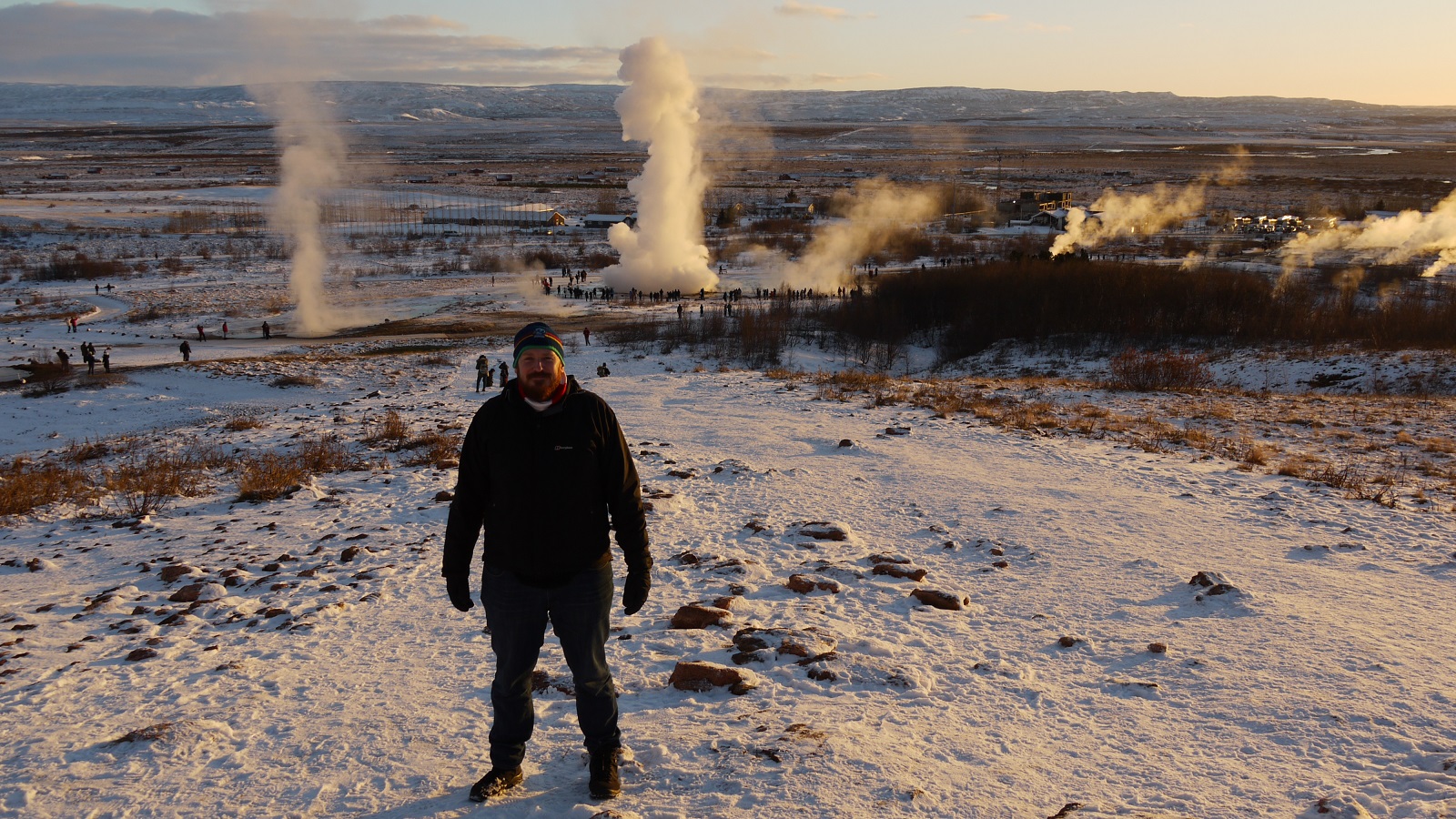 Joe standing in geyser valley, with the famous Strokkur geyser erupting in the background.

Why I went to Reykjavik
For as long as I can remember, I have wanted to see the northern lights. Despite numerous forays into the north of Europe, from Finland, Sweden and Norway to the Faroe Islands, Shetland and Orkney, I’d never got so much as a glimpse of them. However, one place I hadn’t yet been (which happened to be one of the best places on earth to see the phenomenon) was Iceland. So, with tourism booming in the country, my wife and I decided to book a trip.

My highlight of the trip
We stood in a car park, slowly freezing. It was midnight, and we had been there for an hour, experiencing nothing except the gradual numbing of our extremities. But then, all of a sudden, it began. First, a shadow of green flashed above our heads. And then another. Swirls of yellow began to gather in the sky and dance together. Wisps of pink joined the party, and before I knew it, the whole sky had burst into a blanket of bright colours and shapes. I forgot all about my frozen feet and aching fingers, and watched a truly extraordinary half-hour display of celestial beauty.

How’s that for a highlight?

What else I love about Southwest Iceland
Seeing the northern lights fulfilled a lifelong dream, but there were many other incredible experiences during our short stay in Southwest Iceland. We travelled to the Blue Lagoon, a natural geothermal spa in a lava field, to enjoy a welcome dip on a cold winter’s day. We also visited a geothermal valley of geysers, which includes a jumbo jet called Strokkur that erupts every five minutes, shooting water up to 40 metres into the air. We also got to see the beautiful Gullfoss waterfall, as well as the rift valley at Thingvellir, a UNESCO World Heritage Site that was formerly home to the Icelandic parliament. Another thing we loved about Iceland was the capital, Reykjavik. Overlooked by many visitors who are (understandably) seeking Iceland’s natural wonders, we found it charming and picturesque. 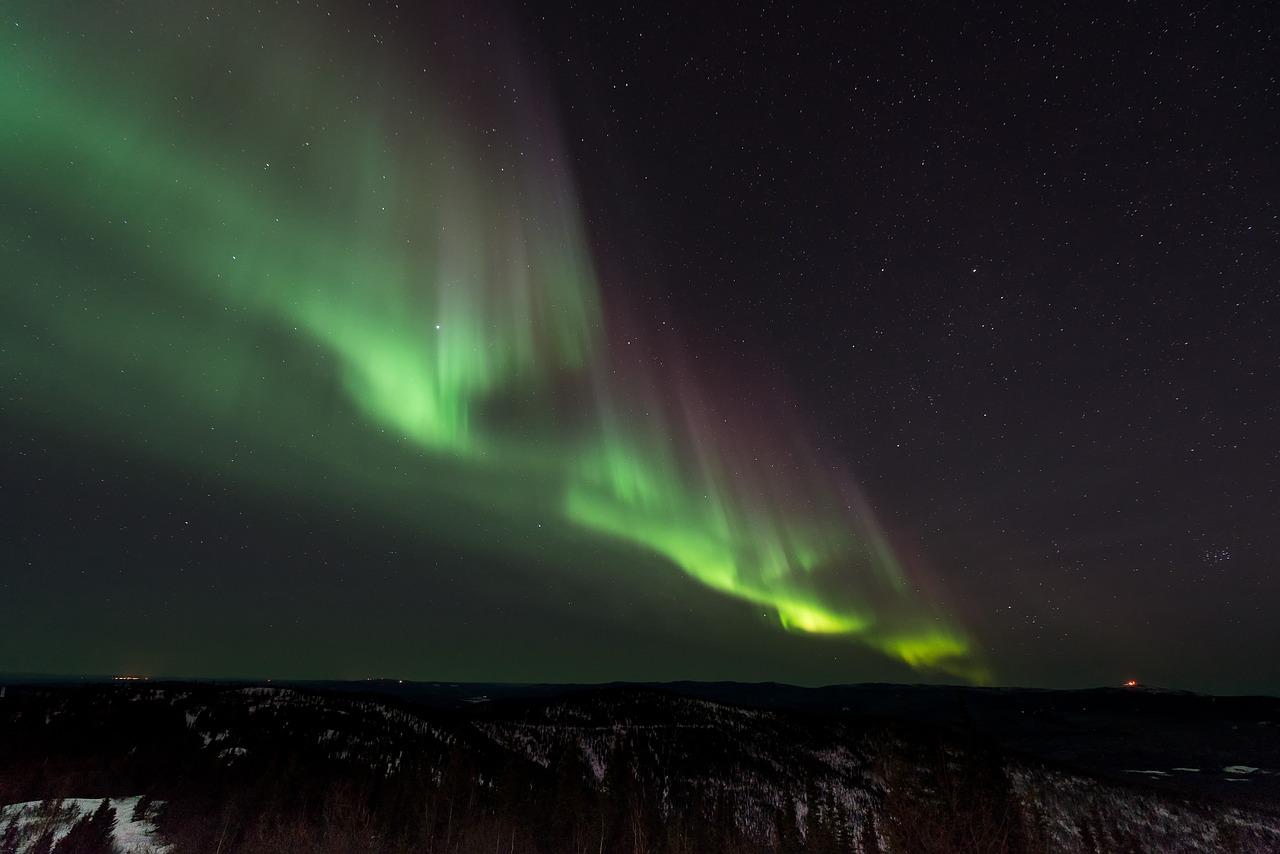 The northern lights (aurora borealis) were visible in the winter sky just outside Reykjavik.

Why you should go
Within two hours of arriving in Iceland, we promised ourselves that we’d come back. Our short stay only allowed us to see a portion of what Southwest Iceland has to offer – and, of course, there’s the rest of country to consider too – yet some of the amazing things we saw and experienced, including the northern lights, the blue lagoon and the geysers, will stay with us a very long time. When it comes to weekend breaks, nowhere else quite compares.

How you can visit
Reykjavik’s Keflavik Airport is well-served by international flights. We booked through an agency, but the airport is also served by budget airlines including Easyjet, Vuelling and Wizzair, as well as national carriers such as British Airways, Lufthansa and, of course, Air Iceland. There are regular buses from the airport to Reykjavik’s city centre.

At World Words, we’ve written a couple of times about Iceland, and we regularly produce content on places around Europe. You can read more about our team’s travels here, or keep up with our adventures on Twitter.

One thought on “Our Travels: Southwest Iceland”