The World Words team don’t simply write about travel, they live and breathe it. Whether it’s a remote corner of the British Isles, an idyllic European island escape or an old-timey North American city, this intrepid bunch have never met a holiday they didn’t like. So, with that in mind, we’ve asked them to jot down the highlights of some of their recent trips in a blog series we call Our Travels. This month, World Words writer Georgia spends a week in Dubai.

With a young son in tow, Georgia discovers an epic underwater zoo, stylish beach clubs and the real meaning of the world superlative – starting with the tallest building in the world. Simply scroll down to read about her travels… 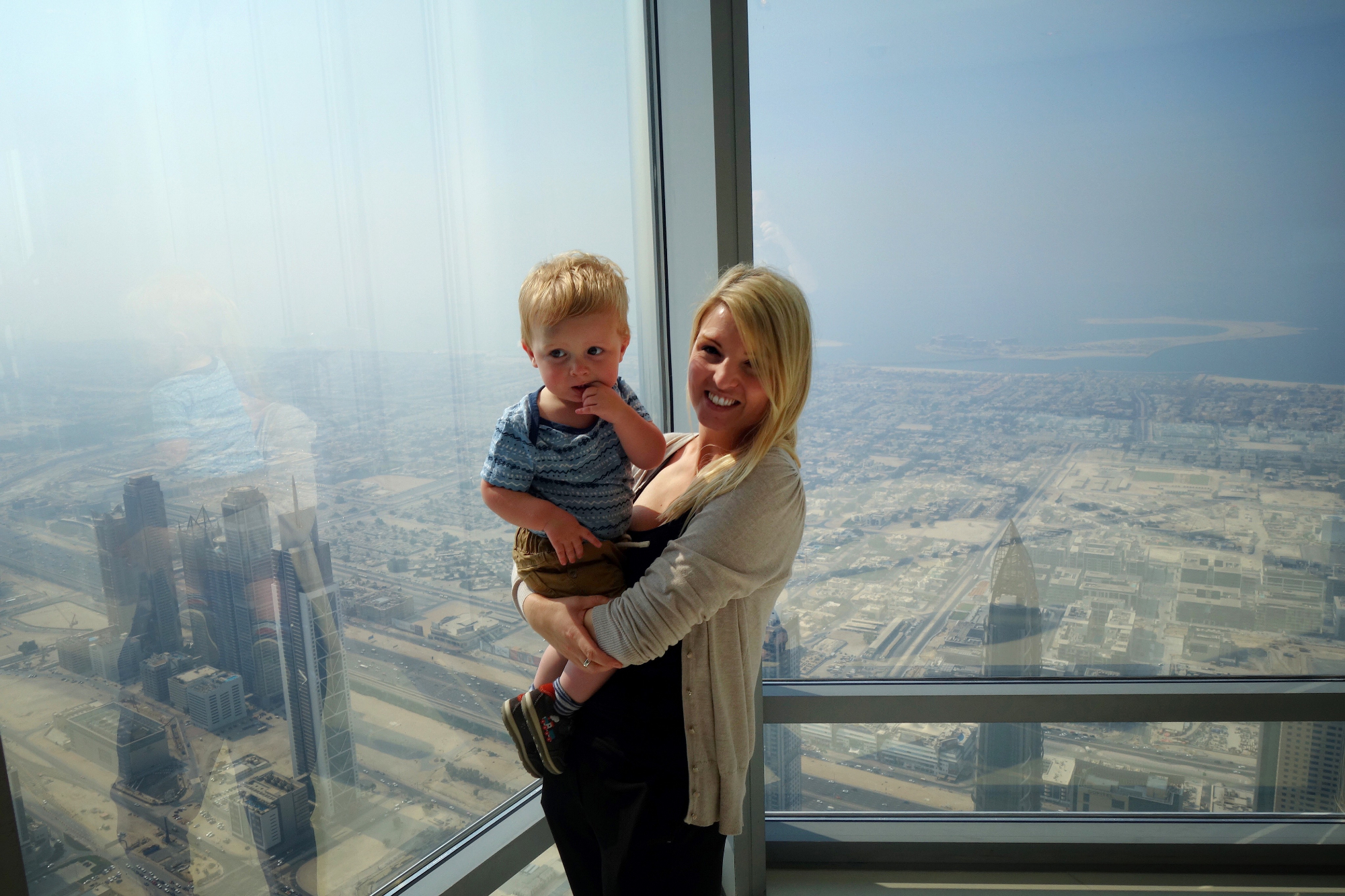 Georgia at the top of Burj Khalifa (the tallest building in the world) with her infant son.

Why I went to Dubai
My first taste of Dubai came six years ago, when I flew out for a beautiful beach wedding in the shadow of the billion dollar Burj Al Arab hotel. The happy couple have since moved to the city permanently, and when the invite came to stay with them for a few days, I couldn’t resist. As it meant my husband and I tackling our first long-haul flight with an infant, I figured we’d make a week of it and booked a few nights in the iconic Atlantis the Palm hotel.

My highlight of the trip
A getaway with a kid in tow will challenge even the savviest of travellers, and holidays have been a whole new ball game since my baby son was born. But the Atlantis was a dream for keeping him entertained. I never got bored of watching the sharks and manta rays in the hotel’s enormous floor-to-ceiling tank, so he certainly didn’t. If you’re game, you can scuba dive inside the epic underwater zoo and feed some of the 65,000 marine animals who call it home, but we mostly stuck to gawping at it from the café.

What else I love about Dubai
They don’t really ‘do’ understated in Dubai. Every new building, hotel or tourist attraction has ambitions of being the biggest and flashiest, and often succeeds. The aquarium at the Atlantis is the largest in the Middle East and Africa. The Burj Khalifa skyscraper is the tallest building on the planet. The shopping malls have in-house ski slopes, aquariums and theme parks. The Burj Al Arab Jumeirah is the world’s only seven-star hotel. You get the idea; they don’t do anything by halves here and it’s quite the spectacle. 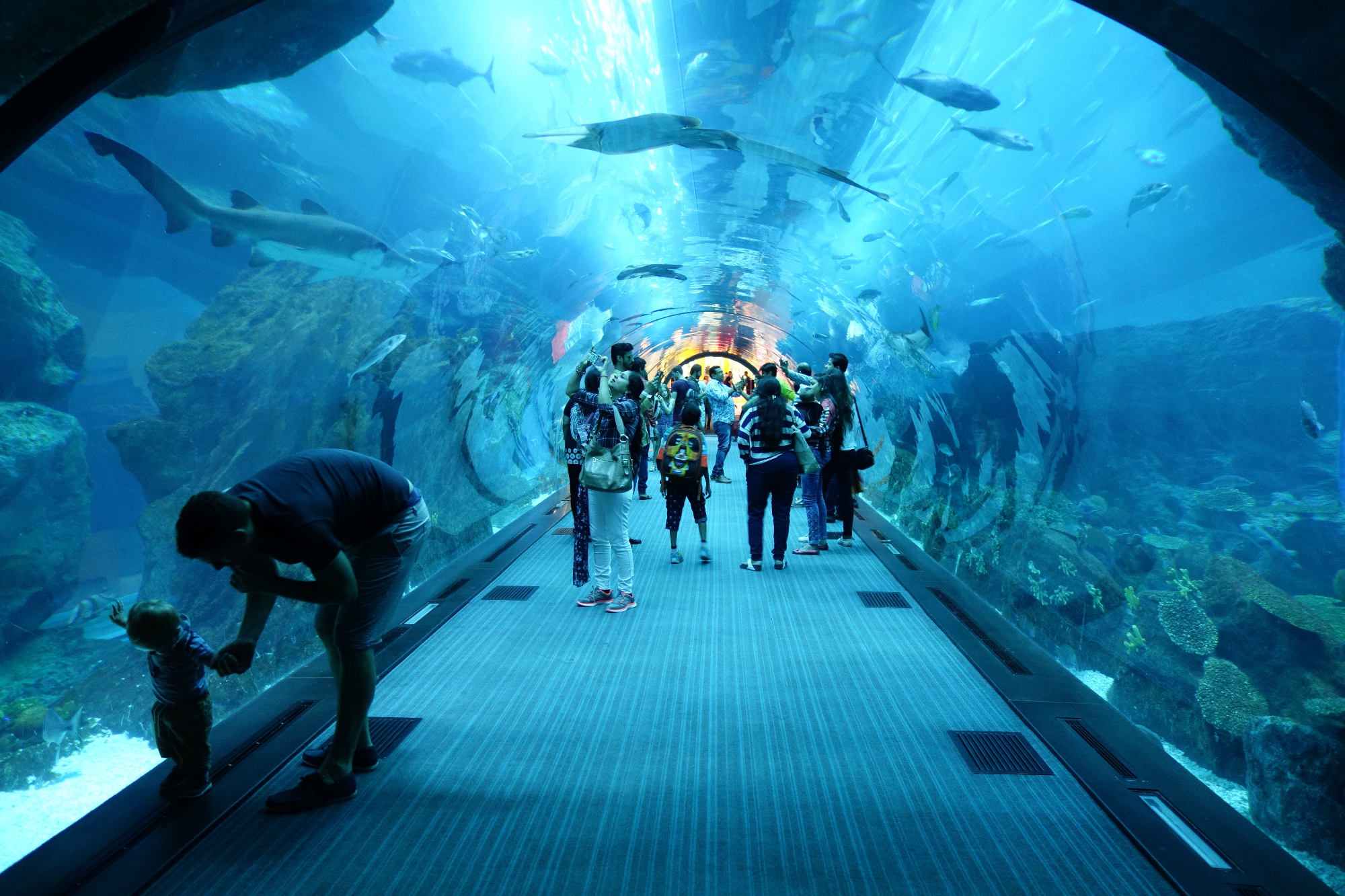 The Dubai Aquarium and Underwater Zoo on the ground level of the Dubai Mall.

Why you should go
If you like beach holidays and luxury hotels, Dubai is a no-brainer. What this place doesn’t know about glamorous sunshine getaways isn’t worth knowing. For shoppers, the enormous malls are visitor attractions in themselves. There’s plenty of after-dark entertainment in the shape of stylish beach clubs and rooftop bars, while the food scene showcases the best of pretty much every cuisine on the planet. A curious mix of modern innovation and ancient tradition, Dubai is an exhilarating city. And it’s a place that’s changing all the time, so it never gets boring.

How you can visit
Dubai’s international airport is home to the city’s own airline, Emirates, and is (unsurprisingly, in a land defined by superlatives) the busiest airport in the world. Flights from across the globe carry more than 70 million passengers here every year, so it’s a straightforward, well-trodden route from many countries. Here’s a map of all their routes.

The World Worlds team often find themselves writing about Asia and the Middle East… and we have recently written this HomeAway guide to Dubai. You can keep up with our latest adventures by following us on Twitter.