The content team at World Words have a real passion for travelling. Well, what else do you expect from dedicated travel content writers? Our writers and editors are always busy exploring the globe, from inner-city culture to idyllic island escapes, and they love nothing more than sharing their experiences with others. That’s why we’ve created a brand new blog series called Our Travels, in which our team members share their experiences directly with you.

It all started last month, with this article from staff content writer Nathanael on the Isle of Harris. This month, editor-in-chief Joe takes us on a quick tour of Corsica, a majestic island in the Med – just 100 miles off the French coast. 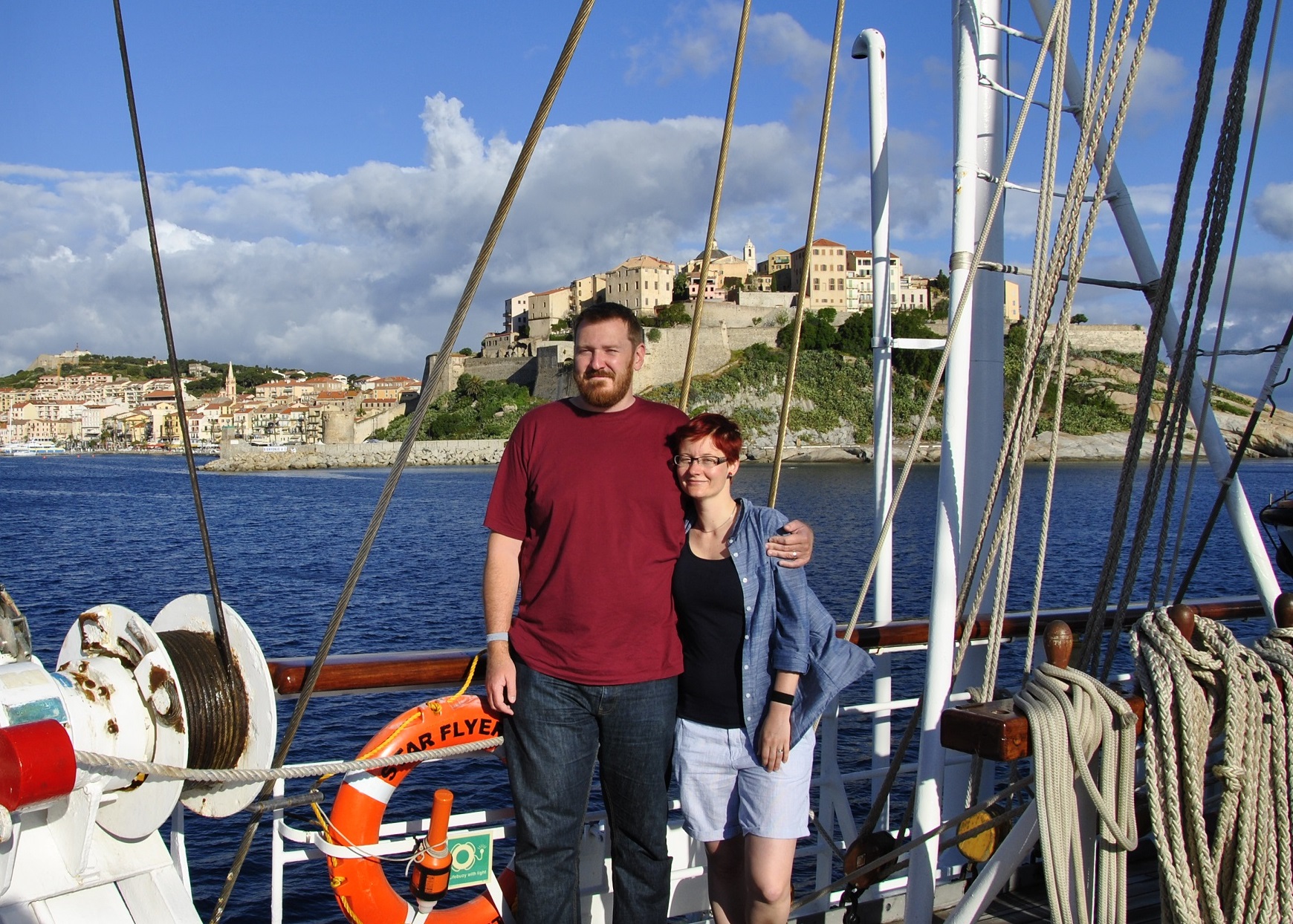 Joe and wife Martina on board Star Flyer, with Calvi, Corsica in the background.

Why I went to Corsica
The honest reason? I was invited. I was on a press cruise with Star Clippers, sailing from Barcelona to Cannes but with island stops at Majorca, Menorca and Corsica en route. I had heard very positive things about Corsica before, so my wife Martina and I were particularly excited by this leg of the journey. We’d already made plans to make the most of our limited time on shore – just 10 hours in the southern town of Bonifacio and then nine in northern Calvi.

My highlight of the trip
After landing in Bonifacio, and spending a couple of hours looking around the beautiful citadel, we walked into a (previously researched) bike shop and hired a scooter for the day. This gave us the freedom to cover a little more of the southern island. First, we took the bike down the coast to picturesque Pertusato lighthouse, then back up to pretty Plage de Santa Giulia. We also managed to find a secluded bay, where we enjoyed a swim in the pristine (if rather chilly) Mediterranean. After this, we zoomed west – back past Bonifacio – to the Golfe de Figari, where we stumbled across a tempting seafood restaurant overlooking the bay. The perfect place for a late, leisurely lunch.

What else I love about Corsica
Our second stop on the island was Calvi, one of the main towns in the north. Calvi is arguably even more beautiful than Bonifacio, with its red-roofed houses, imposing sandstone citadel and white sand beaches complemented by a background of lush green mountains. But our favourite thing about it? You can take a train along the coast from Calvi to L’Île-Rousse. This pretty port town is well worth a visit, home to a gorgeous beach, quaint markets and a spectacular Genoese watchtower – plus noticeably less tourists than Calvi – but if nothing else I wholeheartedly recommend it for the train journey alone. The 30 minutes between Calvi and L’Île-Rousse offer some of the most spectacular coastal vistas in Europe. As something of an aficionado of European coastlines, I don’t say that lightly. 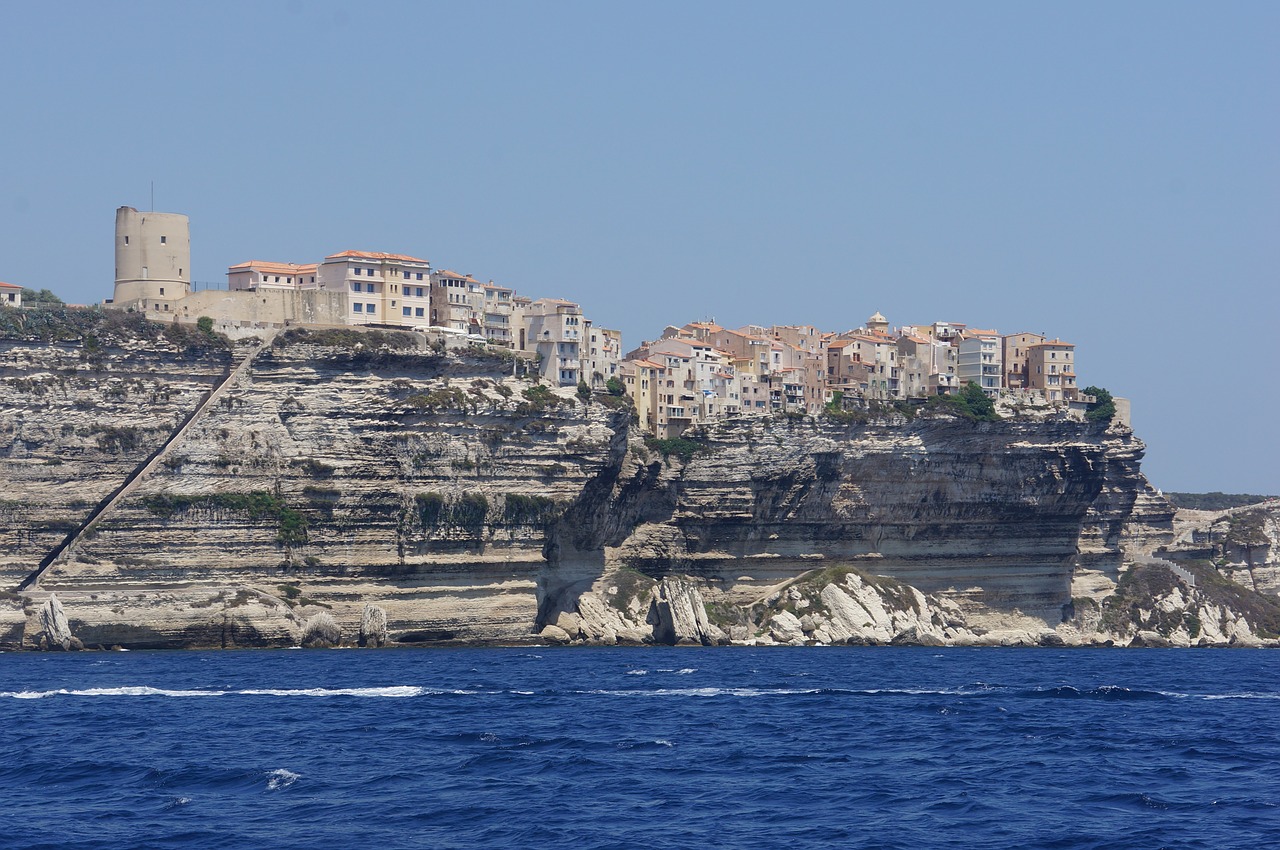 The clifftop citadel of Bonifacio, a town at the southern tip of Corsica.

Why you should go
With fewer than two days on the island, we didn’t begin to scratch the surface of what Corsica has to offer. But we saw enough to know that we will be going back. It offers a rare blend of fascinating history, stunning coastline and amazing hiking/cycling opportunities, with the considerable added bonus of being unspoilt by mass tourism. For a Mediterranean destination with this much to offer, that’s pretty remarkable, so go and enjoy Corsica while you can.

How you can visit
Corsica isn’t served by many international airports, which is probably why it has managed to (so far) keep out the hordes of tourists. But it isn’t all that hard to get there – simply catch a flight to Nice or Marseille, and then hop on a high-speed boat. The journey by sea only takes three hours. Which, for a week-long trip, is a drop in the ocean.

The World Worlds team regularly write about France and its islands, and you can read some of work on the country here. You can read more about our team’s travels here, or keep up with our adventures on Twitter.

5 thoughts on “Our Travels: Corsica, France”