When it comes to lifestyles, World Words team members are hardly what you’d call home birds. Our globetrotting travel writers and editors are pretty much constantly on the move, scouring interesting destinations near and far, both for research and for pure pleasure. In this knowledge that our intrepid team members are always on the go, we’ve created an Our Travels blog series, allowing them to share their latest travel-related tales and experiences.

Our staff content writer Nathanael got the ball rolling with his account of a trip to the Isle of Harris. Next up, editor-in-chief Joe took us on a whistle-stop tour of Corsica. This time around, our senior content editor Mandy invites us along to Quebec City, the history-steeped Francophone capital of the Canadian province of Quebec. So let’s go… 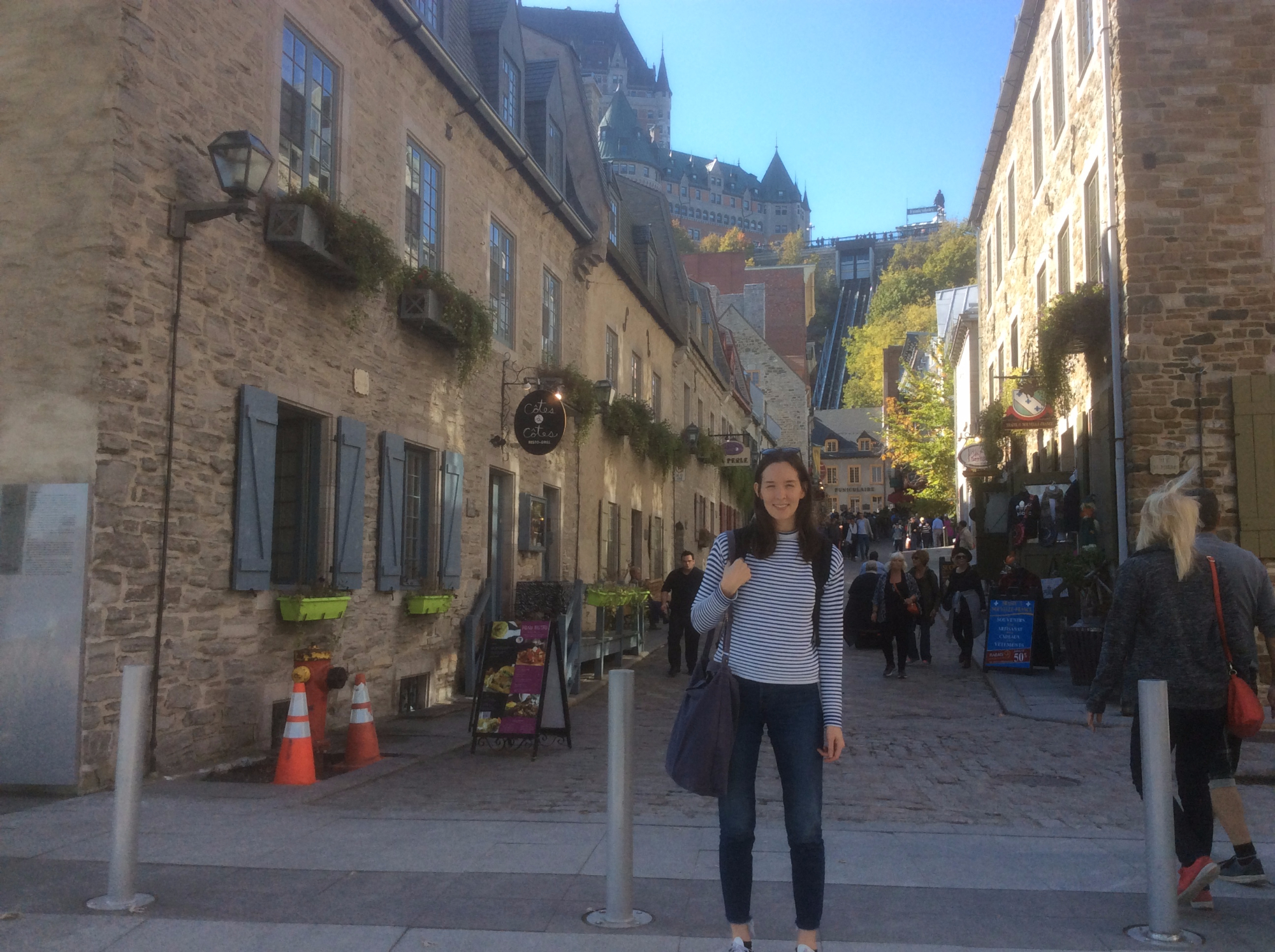 Mandy in the UNESCO-listed old city with the Old Quebec Funicular in the background.

Why I went to Quebec City
As a European transplant in North America, I was itching for a fix of the Old World. Quebec City, with its cobbled streets, centuries-old architecture and unmistakably French flavour, fit the bill perfectly. And, as it’s just a couple of hours from my home in Montreal, it would make an easy weekend break destination for me and my visiting mum.

My highlight of the trip
I’ve got a soft spot for grand old hotels – the more venerable, the better. So the highlight of Quebec City for me was always going to be snooping around the castle-style Château Frontenac. Inspired by the charming châteaux of the Loire Valley, this fabulous hotel is as exuberant as they come with its crowd of oxidised copper turrets, towers and spires lording over the city from its loftiest point. We didn’t fork out for a luxury room at the landmark building, but we did take a tour, nosing around the hallowed corridors where esteemed guests such as Winston Churchill and Franklin Roosevelt (both of whom came here for the World War II Quebec Conferences), and Alfred Hitchcock (who filmed his 1953 thriller ‘I Confess’ here) had previously trodden.

Though much of the hotel interior has been given a modern refit, classic heritage features – including hand-painted ceilings, wood panelling and fireplaces – ensure it still effectively summons the past.

What else I love about Quebec City
We took a bus to Quebec City, which travels along the Autoroute 20 highway. It’s not the prettiest drive in the world: the surrounding landscape is, for the most part, flat and featureless. But on the fortuitously sunny day we set off, the bus route did have one redemptive feature; unobstructed views of some of the most sublime fall foliage I’ve ever encountered. To me, the roadside scenes resembled an impressionist artwork, with loose brushstroke-like bursts of intense gold, rust, green and maple-leaf red fleeing by the window.

In Quebec City itself, there were further leaf-watching opportunities with particularly fine views from the Terrasse Dufferin boardwalk, the cliff-side Promenade des Gouverneurs and the grassy Plains of Abraham (now a public park), where the British conquered the French during a pivotal 1759 battle. 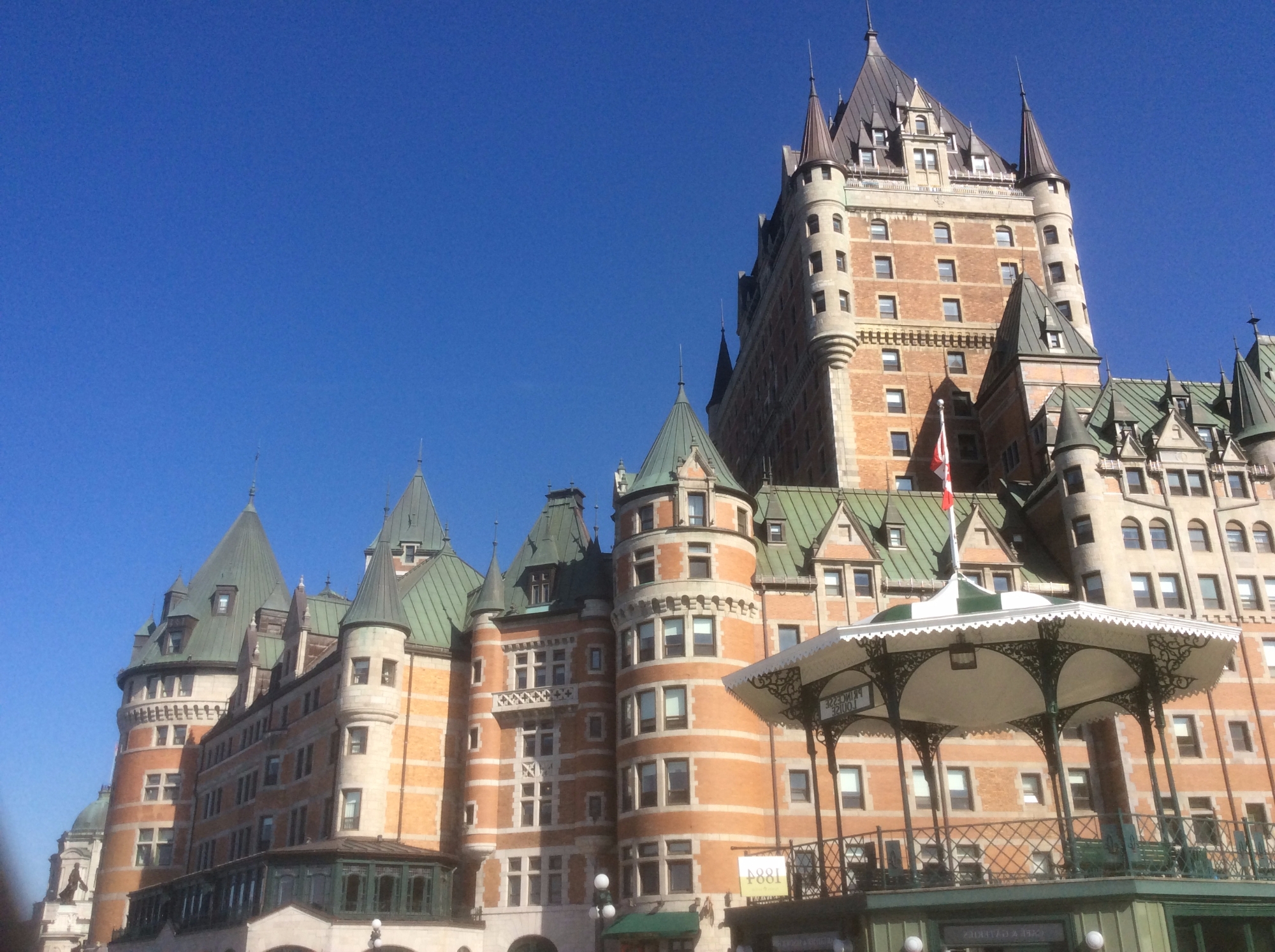 The iconic Fairmont Château Frontenac in the Upper Town (Haute-Ville) of Quebec City.

Why you should go
Quebec City is quite unlike anywhere else in North America, and promises a winning combination of cobbled charm, French-style sophistication and a laid-back ambience. There is also some excellent drinking and dining to be had here if you ditch the cruise ship crowds of the historic old core and head for the bistros, bars and cafés of Saint-Jean-Baptiste or Saint-Roch neighbourhoods instead.

How you can visit
Quebec City is served by Quebec City Jean Lesage International Airport (YQB), with direct flights arriving here from destinations across Northeast America, Florida, the Caribbean and Central America. If you want to fly direct from Europe, you’ll have to take off from Paris. From Montreal, getting here is a breeze. Regular buses and trains ferry travellers between the two cities and take just over three hours, while driving yourself will cut the journey time to under three hours.

The World Worlds team often find themselves writing about Canada, and you can read some of our Canada-focused content here. You can also keep up with all our team’s latest adventures by following us on Twitter.