Here at World Words, we are not simply sitting behind our laptops, crafting inspiring and evocative travel writing. We are out in the field, doing what we love best and digging deep to discover new, fascinating destinations and quirky angles on well-loved places. With our team members always visiting somewhere interesting, we have put together the Our Travels blog series, so they can share all their latest and greatest travel tales and experiences.

We have already covered a range of interesting destinations around the globe, from Quebec City and Corsica to Southwest Iceland and Dubai. This month, we’re keeping things a little closer to home (or, at least, our UK home), as content writer Samantha Wilson sets off on a family escape to the Isle of Wight. Scroll down to find out more… 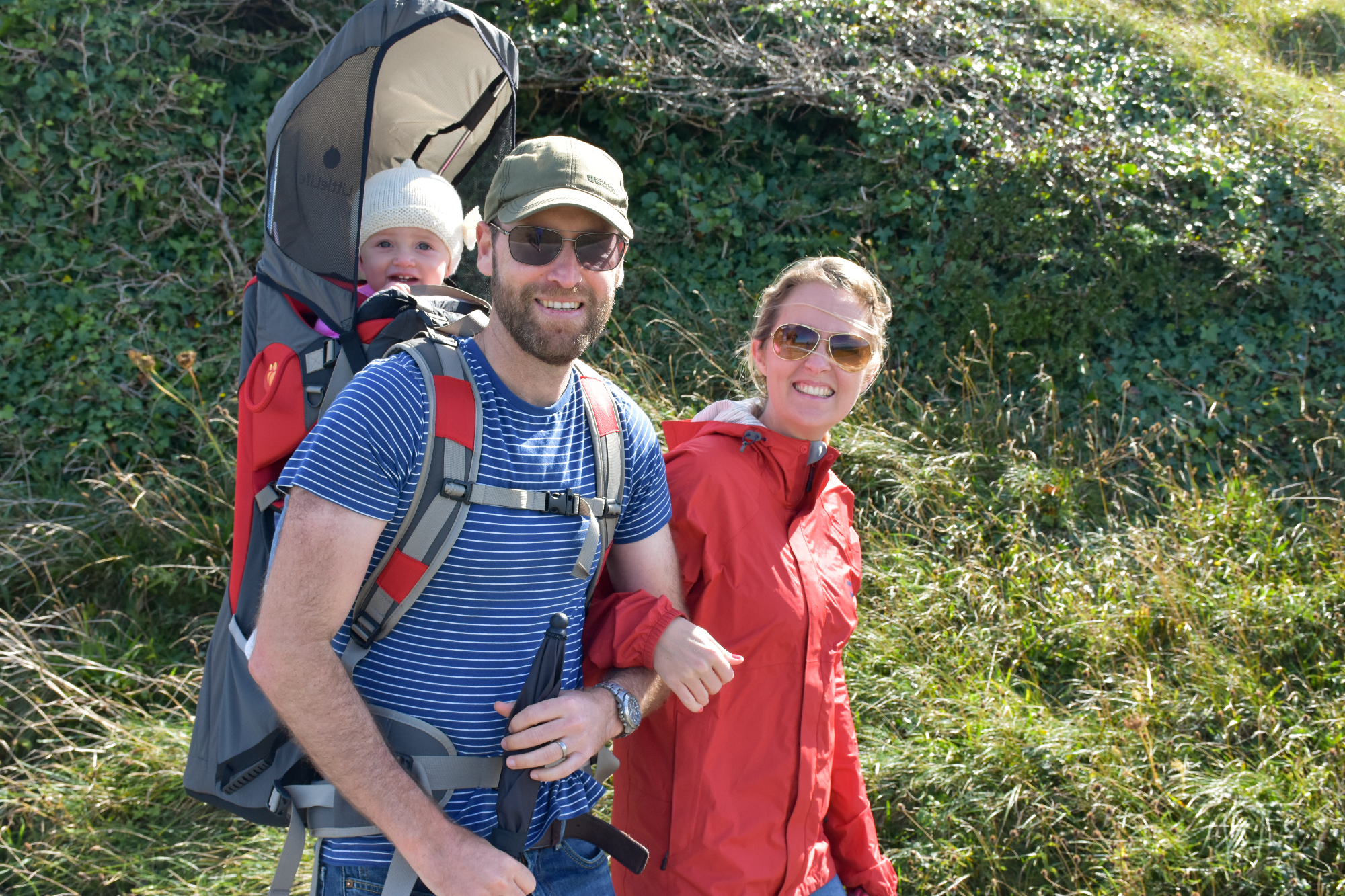 Sam with her husband and young daughter, enjoying a brisk hike on the Isle of Wight.

Why I went to the Isle of Wight
Having lived abroad for the better part of my life, I am itching to get to know my native UK a little better. And, with a young baby and my mum in tow, we (my husband and I) thought it would be a refreshing change to simply hop on a ferry and head off to explore the staggering geology and natural beauty of the Isle of Wight. I also secretly hoped to stumble across some dinosaur fossils, Jurassic Park style (the island is famous for its dino discoveries).

My highlight of the trip
The dinosaur fossil-hunting turned out to be a roaring (excuse the pun) success, and scouring the wet sands of Compton Bay Beach at low tide was an incredible experience. We were walking in the footsteps of 130-million-year-old beasts. Paleontologists have named the Isle of Wight the dinosaur capital of Europe for its rich remains, and over 20 species have been discovered here. I initially thought the chances of finding dinosaur footprints had been slightly embellished by the relevant tourism authorities, but my cynical mind was – wonderfully – proven wrong. Vast, intact, algae-covered and unmistakable, they littered the beach like something out of a movie set.

What else I love about the Isle of Wight
My visit to the wilder west side of the Isle of Wight was filled with views that made us slam on the brakes and leap out of the car, camera in hand. Sweeping stretches of empty beaches sit at the bottom of crumbling cliffs, and rolling green pastures (broken only by age-old hedgerows) are inhabited by plump sheep. Yet The Needles are probably the island’s most famous natural feature, and rightly so. Spiking from the frothing chalky blue waters, they rise like three jagged white teeth and, together with their classic red and white striped lighthouse, mark the far western extent of the island. We walked a slice of the Isle of Wight Coast Path to reach the viewpoint, passing interesting sights along the way, including a decommissioned military battery that was in use for over 100 years. 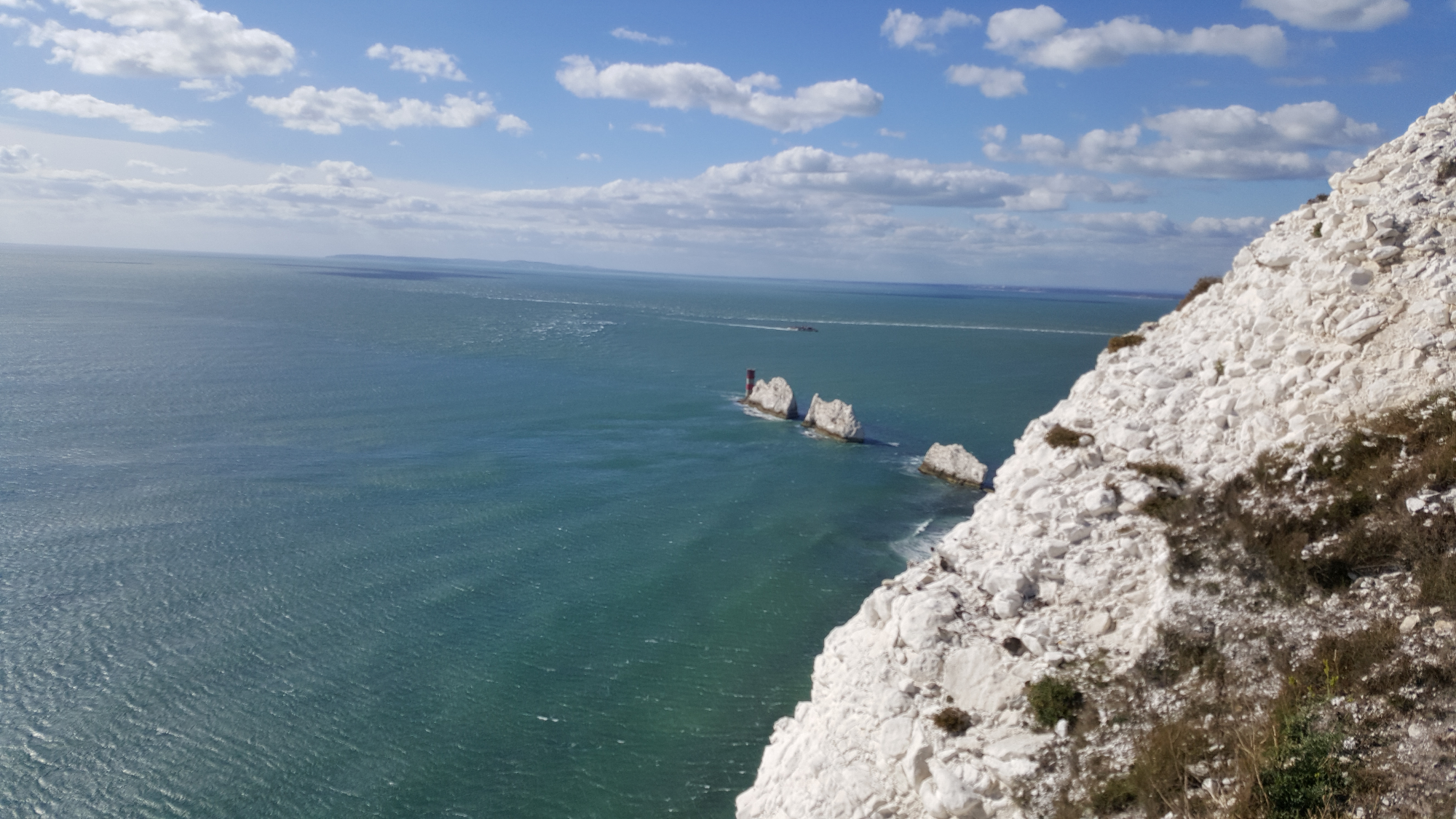 The Needles are “the island’s most famous natural feature… like three jagged white teeth.”

Why you should go
The Isle of Wight is like a step back in time. Actually, lots of steps back a very long way in time. On one hand, it is a slice of classic Britain by the seaside; a simple, beautiful, bucket-and-spade-on-the-beach, fish-and-chips-for-tea kind of place. Yet on the other hand, it’s also an island where you can delve further into the past with fascinating geology, romantic castles, a proud maritime history and even some Roman ruins thrown in for good measure. You can also enjoy the cosy country pubs, museums for rainy days and an unhurried, delightfully old-fashioned vibe.

How you can visit
The way to the Isle of Wight is via the car and passenger ferries, and there are several routes with sailings almost every hour. The journey takes 30 minutes to an hour depending on the route, and you can embark at Portsmouth (for Fishbourne), Lymington (for Yarmouth) and Southampton (to East Cowes). I definitely recommend taking a car.

With a base in the UK, the World Words team have written lots and lots of travel content about England; read some of our articles and guides on England here. You can also stay in loop with all our latest news on Twitter.