If there is just one thing you need to know about World Words writers and editors, it is that we love to travel. And we don’t just mean two weeks on a Spanish beach or a weekend break to New York (though we wouldn’t say no to either) – we go out and explore some of the most interesting, adventurous and often lesser-visited destinations in the world. Right now, you can find our team members traversing pretty much every continent, having incredible experiences that will help inform the expert travel content we create for our clients. Yes, we know… it’s a hard life.

Once a month or so, we like to share some of our team’s recent trips on our blog, in a series we call Our Travels. Regular readers will know we’ve previously covered everywhere from India to The Gambia and from Canada to Thailand. This month, World Words’ editor-in-chief Joe is heading to South America. In fact, he is heading to the very south of South America – Patagonia. Scroll on down to read his account of his eventful Chilean adventure… 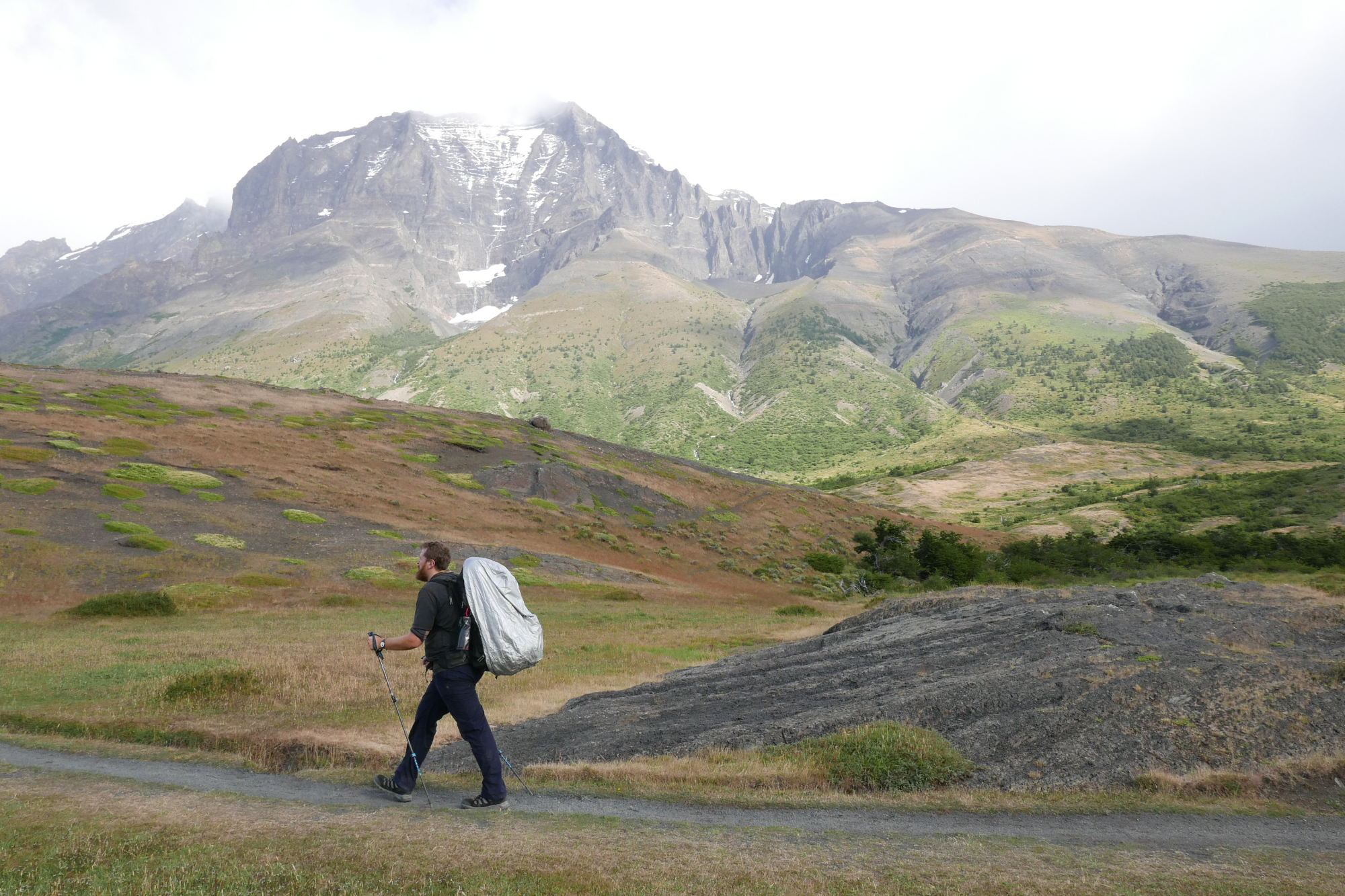 Joe hiking along a section of the five-day ‘W’ trail through Parque Nacional Torres del Paine.

Why I went to Patagonia, Chile
Earlier this year, I spent three-and-a-half weeks in Chile. During this time, I got to see several different sides to the country, from the bustling capital of Santiago to the colourful coast around Valparaiso to the green wine-growing Maule region… as well as Easter Island, which I covered in a previous Our Travels blog. But surely no trip to Chile is complete without a stay in Patagonia. Located at the southern tip of the country (and the continent), the region’s rugged mountains, crystal clear lakes and penguin-covered islands are a big draw. And it’s one I could not resist.

My highlight of the trip
The highlight of any trip to Chilean Patagonia is the Parque Nacional Torres del Paine. The spectacular landscape attracts hikers from all over the world, most of whom do the five-day ‘W’ trek (named for the rough shape it marks on the map). As my wife and I were on a tight schedule, we did the same. Despite visiting in peak season, it was nowhere near as busy as we had feared; once out of range of day-trippers, there was plenty of space to breathe.

The first three days of the trek were, quite simply, incredible. We spent the long days hiking up rugged mountains, through steep river valleys and alongside gorgeous glacial lakes, all bathed in sunshine, while the short evenings were spent cooking, playing games and socialising on basic trail campsites (we carried a tent, sleeping bags and food supplies in heavy backpacks). With the fourth day, however, came torrential rain, which made for slightly less enjoyable hiking. And on the fifth day, overnight flooding meant the final section of path had been closed, so we had to depart by boat one day earlier than planned. Still, the time we’d spent in the park had been extraordinary.

What else I love about Patagonia
Aside from Torres del Paine, we also explored some other parts of Patagonia. There were some fine restaurants and bars in the Puerto Natales (welcome after four days of cereal bars and dry food), several pretty streets and squares in Punta Arenas, and a memorable half-day trip to Isla Magdalena, home to a thriving penguin colony.

But perhaps the most impressive sight of all was the Perito Moreno Glacier. As we had left Torres del Paine a day earlier than anticipated, we decided to make up for lost time with a border-crossing excursion to Perito Moreno in Argentina. It was a long and arduous trip from Puerto Natales – a five hour bus each way – but it was more than worth it. Watching the gigantic glacier (30 kilometres long, five kilometres wide and up to 75 metres high) advance before your eyes, leading to enormous icebergs cracking off and crashing into the water, will stay with me forever.

The towering Perito Moreno Glacier, from which regular bus-sized chunks of ice fall into the lake.

Why you should go
Patagonia is on every traveller’s bucket list. It has a place in the collective imagination that’s matched by few other destinations in the world. And yet, despite all the hype and the expectation, it still delivers… in spades. Speaking from personal experience, I have trekked throughout the Swiss Alps and the Italian Dolomites, climbed to Everest Base camp and hiked Jordan’s incredible wadis, and Torres del Paine is undoubtedly right up there. Throw in the region’s charming towns, fascinating indigenous history and playful penguin colony, and it really is hard to resist.

How you can visit
There are regular Latam and Sky Airline flights from Santiago de Chile to Punta Arenas, with some continuing on to Puerto Natales. You can comfortably walk around either of the cities (small towns, really) or flag down passing taxis for longer journeys. To get to Torres del Paine, there are coaches leaving every day from Puerto Natales.

You can read some of the travel content we have written on South and Central American destinations on our projects page. And don’t forget to follow us on Twitter to keep bang up to date with all the latest travel news.

One thought on “Our Travels: Patagonia, Chile”