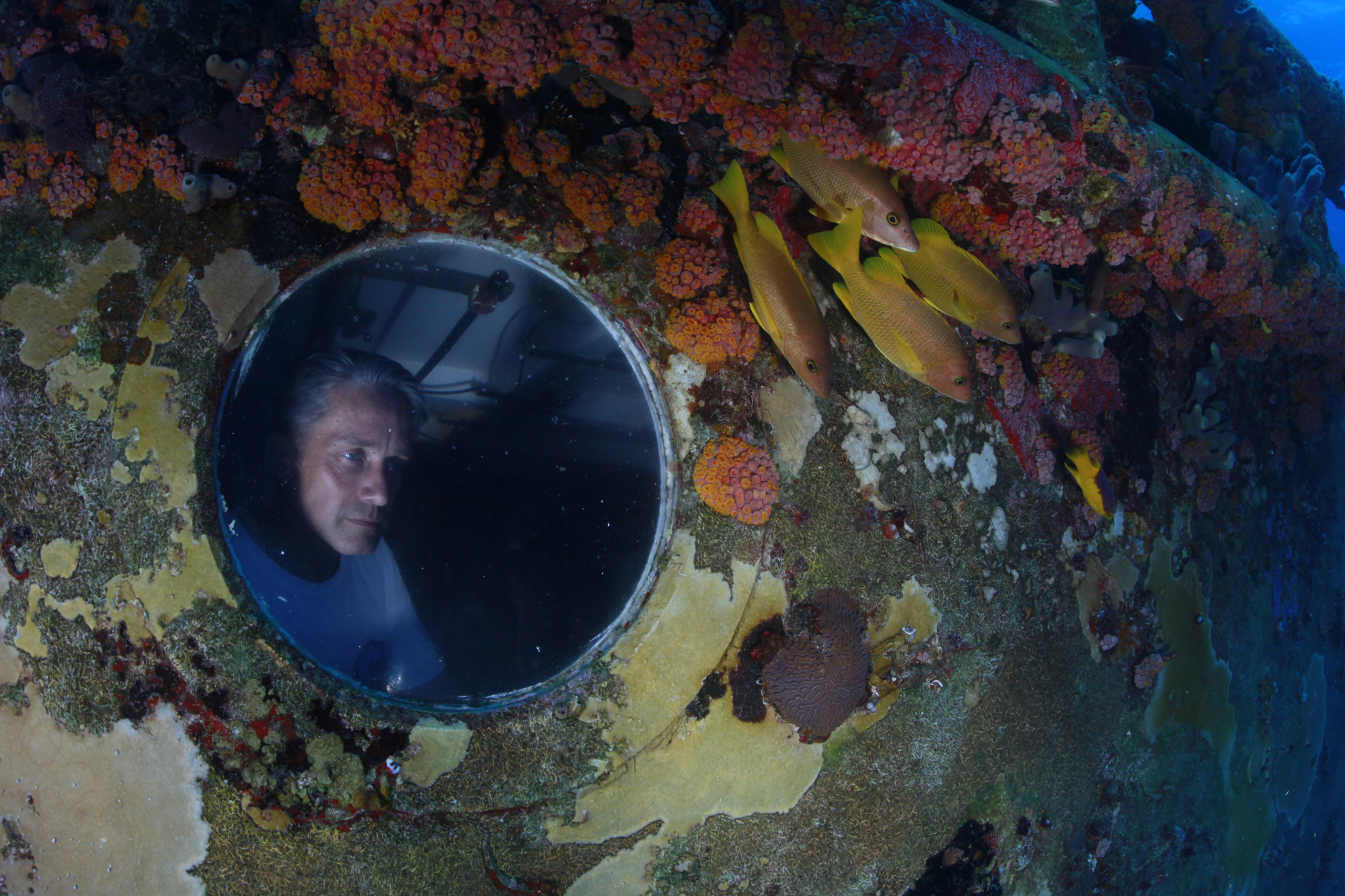 Fabien Cousteau: Into the Deep
“The biggest hardship of scuba diving is the time when you realize that you have to go back up to the surface,” says Fabien Cousteau, grandson of legendary ocean explorer Jacques Cousteau. A dedicated philanthropist and environmental activist, the aquanaut recently spent 31 days living in the world’s only underwater marine laboratory, 63 feet under the sea in the Florida Keys. “For Mission 31 specifically, what was probably the most jarring part was going from a cacophony of life, this fireworks display of life in front of your face 24/7, to piercing the surface and finding silence and an empty sky,” he reflects. “And the only thing waiting for us was a boat and a few human beings.”

Today he is relishing the silence at his home in the woods a couple of hours outside New York City, following a non-stop few weeks. “It’s a fortress of solitude, I guess you could call it,” he says of the house surrounded by fall leaves turning shades of pumpkin and gold. “It’s literally one of the few unknown places left in Connecticut. It’s good for the soul.” This is his retreat from his hectic schedule, which has most recently included speaking at the TEDGlobal conference in Rio de Janeiro and at the Bloomberg Link Next Big Thing summit in New York, where he has been discussing exploration, conservation and environmental initiatives. “It’s been a whirlwind, but it’s been a wonderful, wonderful experience,” he says of the past three months since he stepped into the global spotlight with the groundbreaking Mission 31.

When you delve into what drives 47-year-old Cousteau, the urge to immerse himself in the ocean and all its mystique was fueled from a young age. Some of his earliest memories are of being aboard his grandfather’s ships, Calypso and Alcyone, and he learned to scuba dive on his fourth birthday. He certainly takes after his grandfather in his commitment to braving what he calls the final frontier on our planet. “There are two things that drive me…” says Paris-born Cousteau. “A childlike curiosity that I inherited from my grandfather and my father [Jean-Michel Cousteau], and secondly, the insatiable desire to do good for future generations.” He continues: “We’ve explored less than five percent of our oceans. I have a very optimistic vision for discovering a lot of secrets that the oceans still hide.”

What was the biggest secret that found out during Mission 31? “Well that’s the one I’m not telling you about,” he smiles. “I can’t tell you all of my secrets.” The expedition honored the 50th anniversary of his grandfather’s 30-day Conshelf II underwater living trials in the Red Sea in the early days of saturation diving. Cousteau and his team lived in Aquarius (“the size of a bus”) for a full lunar cycle, with daily diving trips of up to nine hours and education initiatives such as Skype classroom sessions that reached 70,000 students worldwide. Despite such a packed timetable, he says, “There were certainly moments when I was elated, when I would just thank my lucky stars that I was blessed enough to have my eyes opened by the previous generations of what an amazing world this is.” He surpassed his grandfather’s mission by not only staying down longer, but going 30 feet deeper and by using new communication technology which meant that every moment was broadcast on multiple channels globally. “It’s the first time on a Cousteau expedition that we’ve been able to invite the world in live,” he says.

As well as conveying the magic of the ocean to the outside world, there was a deeper narrative to Mission 31. Three years’ worth of scientific data was collected, with areas of study including climate change, ocean pollution and the decline of biodiversity — all pertinent to our everyday lives. For example, the team could provide very tangible visuals on what pollution does to a coral reef system, which affects the network of biodiversity and in turn our health through what we eat. “All these things were served through the lens of adventure and exploration, and pushing the boundaries of not only our knowledge but the boundaries of our physiological and psychological abilities,” he explains.

For New York City-based Cousteau, what was especially compelling was that living in this underwater habitat for an extended period of time gave unprecedented access which differed to scuba diving. “We saw it through a very different lens because of the adaptation of our neighbors to our presence and their acceptance of us being there as one of them,” says Cousteau. “To some extent even a kinship with our presence in their world, which is pretty fascinating because all of a sudden, you start seeing what animals do when we’re not around, and that gives us a very different perspective on the ocean world.” 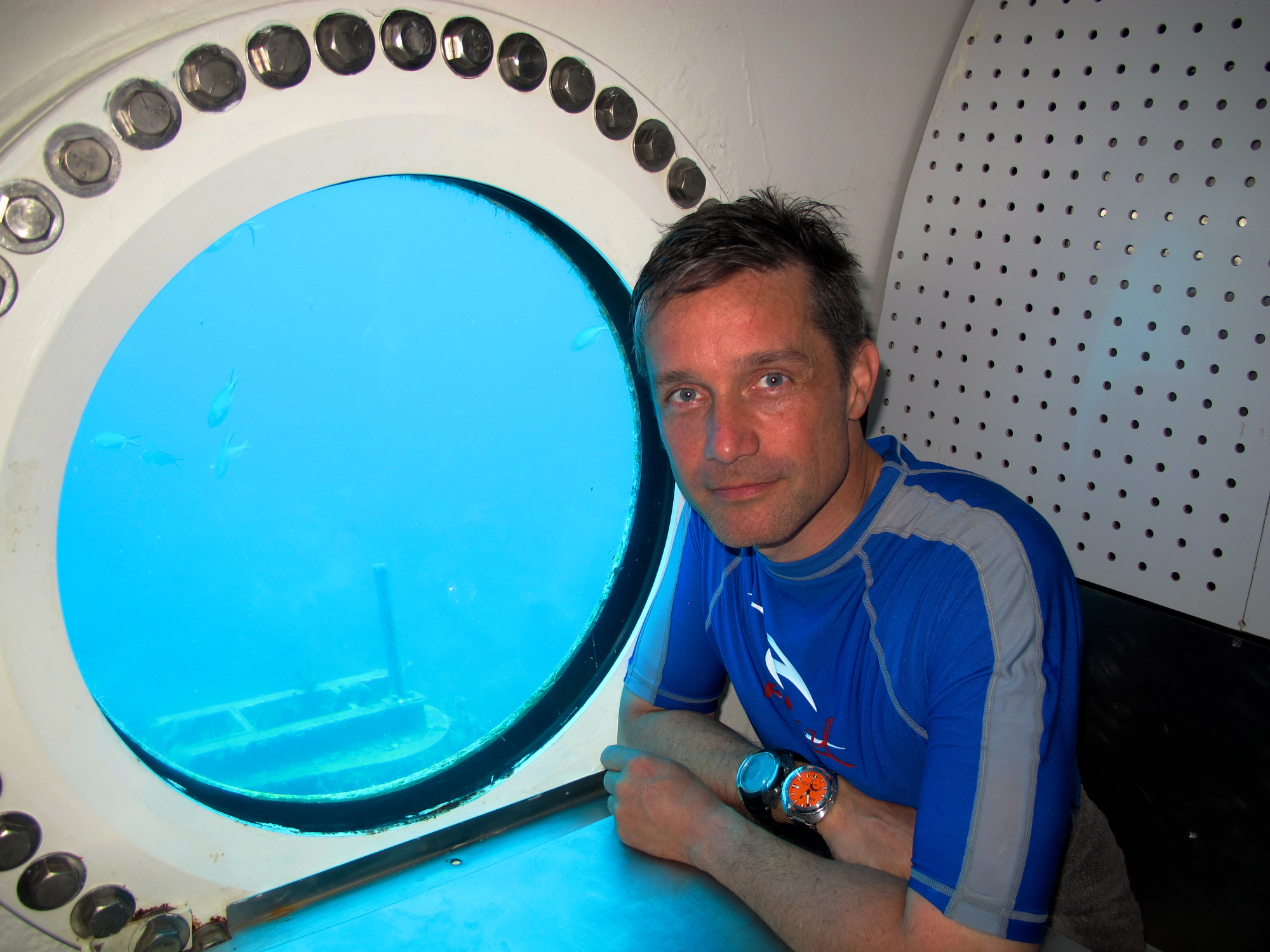 Far from being ready to escape the enclosed, isolated space of Aquarius and return to the surface, Cousteau could have stayed longer. “If we had unlimited financial support from the powers that be, whether they be government, corporate or private, I would easily have stayed down another month,” he says. “The interesting part for me personally was that I felt less and less connected with the topside world and more and more entrenched in this little underwater city and the neighbors that we were studying.” This affected Cousteau greatly in terms of his goals for the future. “It really became apparent to me not only that I was very attached to my new home at the bottom of the sea, but we needed to continue the momentum of the outreach.”

How will he continue trailblazing in ocean exploration and conservation? He is fired up about his Mission 31 documentary, which was previewed at the BLUE Ocean Film Festival in St. Petersburg, Florida In November. Then in early 2015, he will unveil the Fabien Cousteau Ocean Learning Center in Florida. The learning platform will continue Mission 31’s education outreach to children and young people around the world. “It will give the general public a taste of what it’s like to be an aquanaut,” says Cousteau. They will also be able to engage with Cousteau directly through social media and interactive videos.

However the intrepid Cousteau is not stopping there. “What I’m looking forward to is building a completely self-sufficient and environmentally-responsible, modern underwater city. That’s my vision for the future,” he says. “Obviously, we need to fundraise for that.” The project has already attracted interest from Northeastern University and Massachusetts Institute of Technology, but he’s also looking into potential private investment. “We want to push forward, to look further, go deeper and stay down longer than we have in the past,” he says resolutely.

There is no doubt that Cousteau is continuing the ocean legacy of his pioneering grandfather. What does he take with him from Jacques Cousteau? “You know, I very much admire his passion and his vision to the future,” he says. “He was a very forward thinking person, a visionary, a very creative person, and I suspect the greatest gift that I received from him is the notion that nothing is impossible.”

To see the full article in its original form, along with extra pictures, click here. If you want to read more from the spring edition of Private Air New York magazine, visit their website or check out some of the other articles our writers have penned for the publication, including an interview with legendary restaurateur Sirio Maccioni, a rundown of the best private island getaways for 2015 and a look at New York’s lofty Mandarin Oriental hotel. For more travel articles from World Words’ writers, browse our latest projects or follow us on Twitter.

One thought on “Fabien Cousteau: Into the Deep”