We’ve always had a soft spot for the Italian Lakes (natural beauty, sleepy lakeside villages, watersports and gelato – what’s not to like?), so when holiday home rental agency Discover Lake Garda approached us to write travel web copy about one of Northern Italy’s most beloved holiday destinations, we were more than happy to oblige.

We wanted to provide potential holidaymakers with an informative overview of the popular Italian holiday spot, including a brief history of the region. We also wanted to help visitors differentiate between the many resort towns on the lake, as well as offering basic travel and transport advice for the area.

Ever wondered where to go in Lake Garda? Wonder no more. Our overview will help you get oriented with the great lake, explaining the differences between the northern and southern regions and covering the main holiday towns around the lake’s edge including Garda, Riva del Garda and Bardolino.

To read a short excerpt from our Lake Garda destination overview, scroll down below the picture… 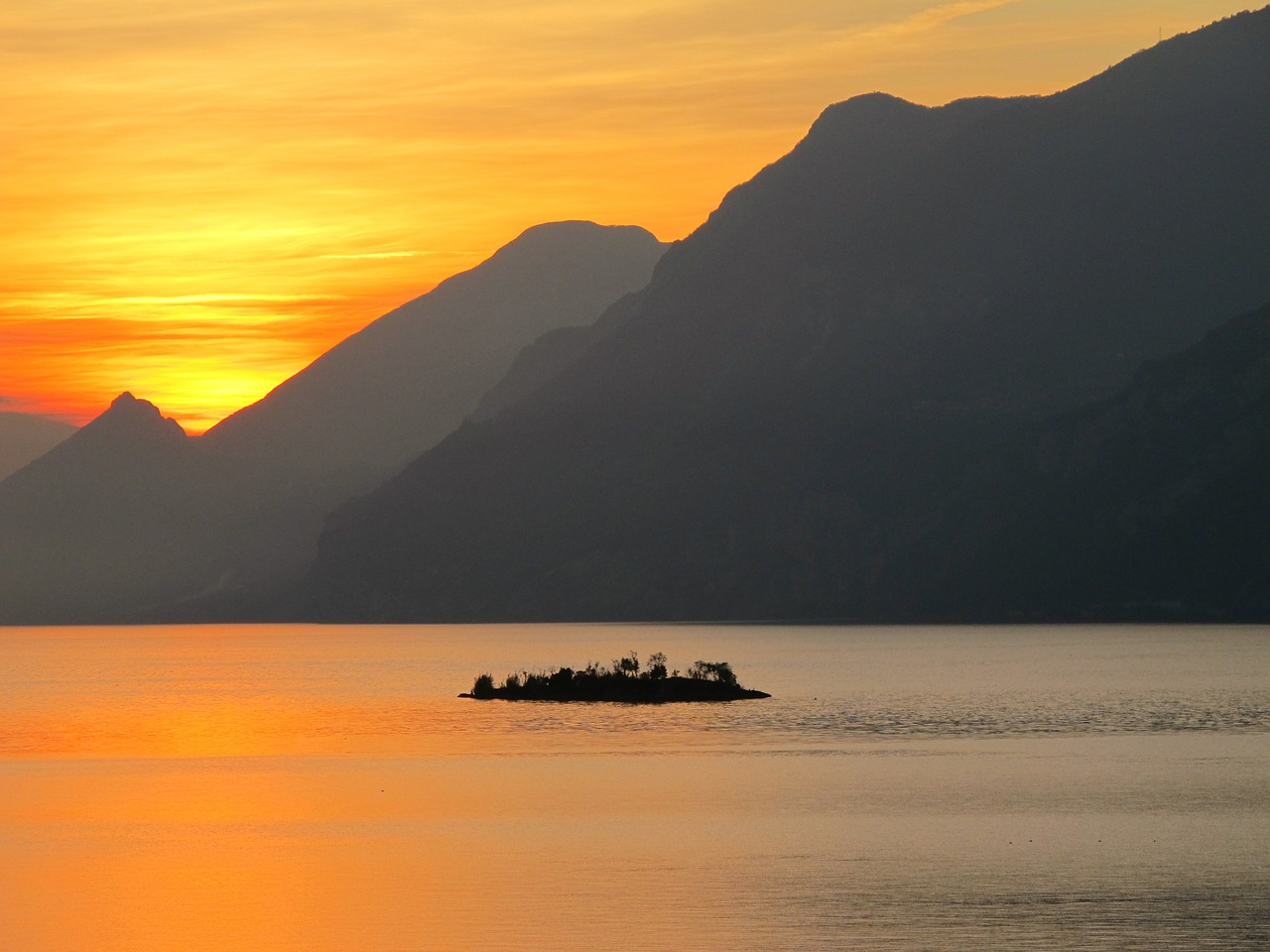 Lake Garda has been charming visitors with its natural beauty for centuries. Notable aristocrats, artists and writers — including Goethe, Kafka, D.H. Lawrence and Ezra Pound — have praised its beauty and allure, and travellers continue to be drawn to the lake’s romantic mix of dazzling waters, mighty mountains, gentle plains and medieval towns. It’s the perfect setting for holidaymakers hoping to indulge in la dolce vita.

South Lake Garda
At the southern end of the lake, the landscape is typically Mediterranean with vast swathes of vineyards and olive groves, as is the climate, which is generally calm and warm. On the southeast lake’s edge, you’ll find the popular resort towns of Garda and Bardolino, located just three kilometres apart and separated by a lakeshore path.

Garda, like many of the lake’s towns, is medieval and pedestrianised, and its wide tree-lined promenade is filled with lively bars, colourful ice cream parlours and restaurants. Next to the town is the La Rocca cliff, which you can trek up to admire sweeping views over the sun-drenched lake below.

Neighbouring Bardolino is another popular destination for incoming visitors. This former fishing village is now rather chic and sophisticated, yet it retains its distinctive Italian character. It’s home to some historical churches — the Romanesque San Severo and 9th-century San Zeno — but it’s known mostly for its eponymous wine, a light red for which grapes are grown in the surrounding vineyards. Also linked by lakeside path to Bardolino is Saló, another town whose chief attraction is its leafy promenade, the longest on Lake Garda.

Sirmione, a pedestrianised town famous for its medieval good looks, is located on the southern shore. It sits on a peninsula jutting out into the pristine lake. It often gets busy, but for good reason. It’s home to the lake’s best-known historical attractions including a ruined Roman villa and a turreted medieval castle named Rocca Scaligera, which guards the entrance to the town. Sirmione has been a spa town since Roman times and many visitors come to soak away their stresses in its thermal baths and wellness centres.

Other popular resorts on the lake include the well-connected Desenzano on the southwest, and the sleepy Gardone Riviera on the western shore, known for its quiet beaches. 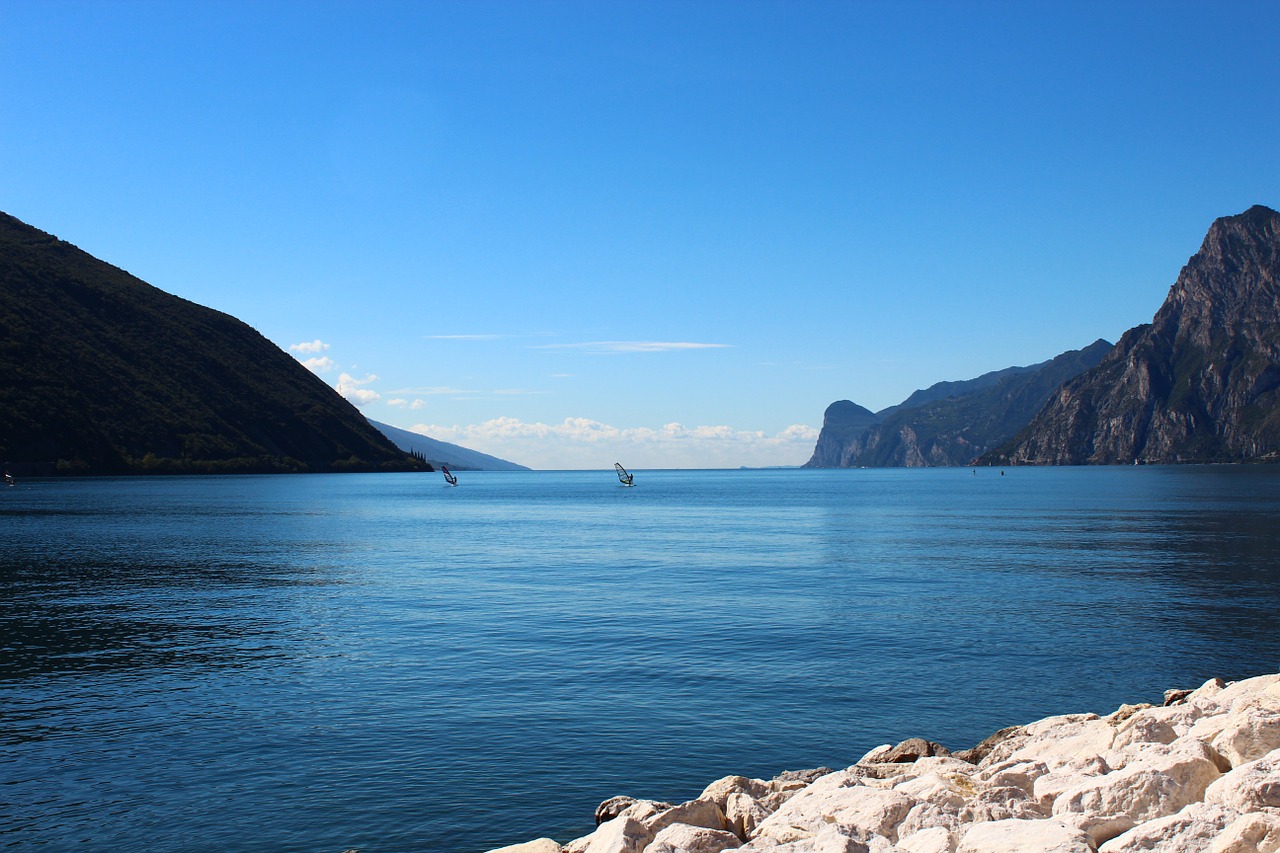 North Lake Garda
At the northern end of the lake, the landscape becomes more dramatic. Gentle hills give way to Alpine surroundings. Craggy mountains tower above the lake’s edge and breezy winds provide a perfect environment for windsurfing and paragliding.

The main resorts at the north end of the lake include the pretty town Riva del Garda, the lake’s second largest settlement. Riva del Garda is a dynamic and buzzy place, with numerous bustling gelaterias, cafes and restaurants. Among its historic highlights is its moated castle, known as Rocco, which is home to an interesting town museum.

Also on the north eastern shore is Malcesine, an enchanting, laid-back settlement with an enviable lake-front location. It’s fronted by a huge castle and backed by steep mountains — in between it’s a cramped labyrinth of atmospheric narrow alleys, winding lanes and cobbled tracks. From Malcesine, you can take a cable car up to the summit of Monte Baldo, which offers truly breathtaking panoramic views of the lake and is the starting point for several hiking trails.

These are by no means the only towns on the lake though. At various points around its perimeter, there are other picturesque and peaceful harbour villages so pretty they look like they have been lifted from a postcard.

The above is just an excerpt from our Lake Garda guide; if you want to read the whole copy, you can do so on the Discover Lake Garda site here. To see more travel writing by our expert team of travel writers and editors, browse the examples on our portfolio page. And don’t forget to come and say hi to World Words on Twitter.