Here at World Words, our expert writing team is constantly on the move and at any one time, you’ll find all our writers scattered across the globe scouring for new ideas for written travel content.

Recently, our World Words editor Joseph returned from a trip to the Azerbaijani capital Baku where he checked out the latest unique high-rise buildings to take their place in the city’s increasingly dazzling skyline: Baku’s Flame Towers. Despite only opening in 2013, this distinctly-shaped trio is already a bonafide Baku landmark and one of them is home to the rather stunning Fairmont Hotel.

This month, we contributed several articles to Private Air Magazine, among them this feature, which focuses on Baku’s Flame Towers and its Fairmont hotel. We spoke to the renowned architects behind the construction, the interior designers responsible for outfitting the sleek, stylish interiors and the lovely folk at the Fairmont too.

And with construction set to begin on the Azerbaijan Tower in 2015 — the soon-to-be world’s tallest building — we’re willing to bet this won’t be the last your hear of Baku or its skyscrapers. So scroll down to read the article. 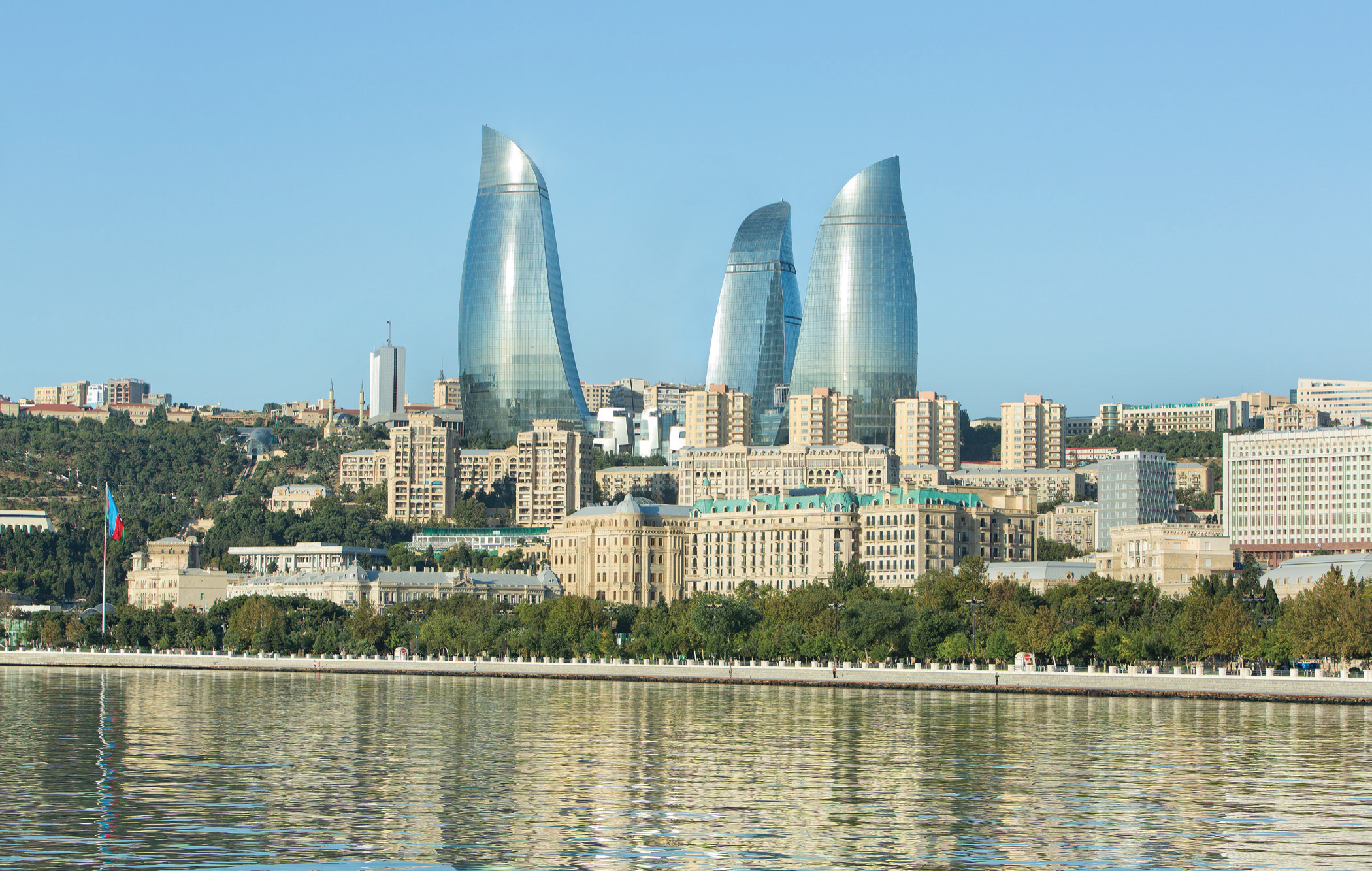 ‘LIKE A PHOENIX: BAKU’S FLAME TOWERS’ for Private Air Magazine

You can see why Baku is often called ‘the new Dubai’. It is a city permanently under construction, where the vast majority of city highlights have been created in the 21st century and even time-honored attractions, like the city’s Old Town, have been so extensively renovated they almost feel like fresh additions. This spirit of newness is best seen in the capital’s landmark architectural achievement, the Flame Towers; three gigantic flame-shaped columns standing high above the city. And one of these towers is home to Baku’s finest hotel.

The architecture
Fairmont Flame Towers opened in early 2013, and was instantly hailed as an iconic landmark. Located at the city’s highest point and climbing even higher into the sky, it is always visible from almost anywhere in Baku.

Designed by renowned architects HOK, the flame columns were a big challenge. HOK’s Head of Mixed Use Barry Hughes says: “The real constraint was to stay true to the flame tower concept. The idea of the flame resonated with the client because it had a direct connection with the history of the region, and Azerbaijan’s tagline, ‘The Land of the Fire’. There were long conversations about the shape and essence of a flame, and the shape of the ‘flick’ at the top. Then the hard work of making this iconic shape work as a building began.”

Impressive as they are by day, the towers take on an entirely new dimension by night. That is because they feature the world’s largest media facade application; customer-designed strips of LEDs above each window that, when lit together, appear to illuminate the whole structure. As each strip is independently controlled, the building can project a variety of images and patterns; the most famous of which is a flickering red flame.

“The engineering and design [of the hotel] represents state-of-the-art technical expertise both in terms of architecture and lighting system,” says designer Francis Krahe. “These applications are unique. The building represents something really dynamic about Baku and the re-emergence onto the world stage of Azerbaijan”. 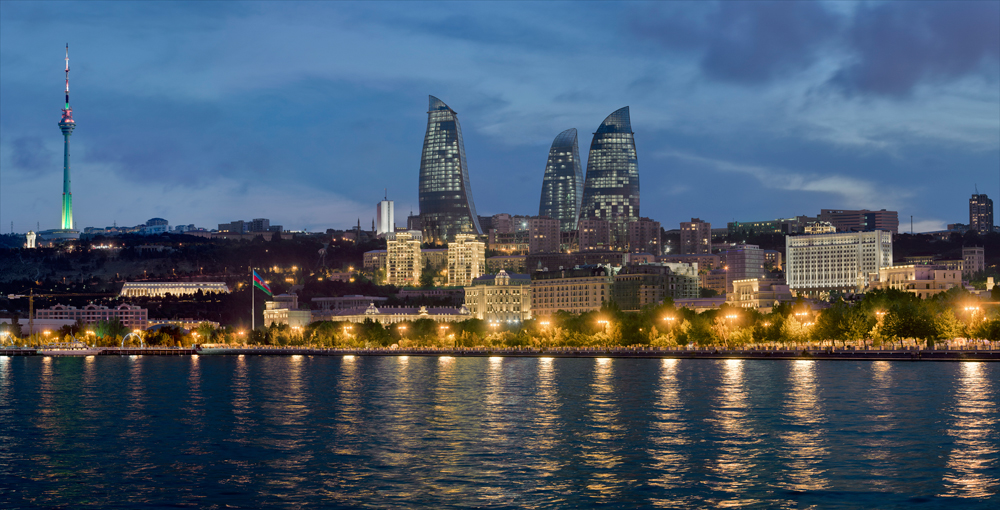 The interior design
There’s no doubt the exterior of the towers are an iconic backdrop to an up-and-coming city. But ultimately, the main highlights of the hotel are to be found inside – and it all starts with the remarkable interior design.

The work of Hirsch Bedner Associates is startling. Walk into the high-ceilinged lobby and you’re greeted by a vast, six-meter-high glass chandelier in the shape of water drops, as well as a series of Anegre wood panels, white Calacatta marble, soft leather columns, purple fabrics and red piping. These colors of fire occur again and again throughout the hotel. There are the red silk wall coverings in the function rooms, the blue accents in the service apartments, the bronze flame-shaped light fixtures inside the ballroom, and the warm amber tones of the ESPA spa. In addition, the Fairmont Gold lounge near the top of the hotel has a dramatic light fixture made from dark crystals, representing the black smoke coming off the flame below. There’s also inspiration taken from Baku itself, such as the carpet patterns inspired by the textured stone of the Old City.

But where the interior design is most impressive is in the rooms. There are 318 in total – 299 spacious guest rooms and suites, including 63 Fairmont Gold suites on a private floor – plus 19 apartments. Regular rooms feature walnut wood, red lacquer and ebony millwork, and are home to walk-in closets, large desks with ergonomic chairs, soft banquettes and Nespresso machines. The bathrooms are decked in beige marble, with oversized showers and smart glass walls, which go from clear to opaque with the flick of a switch. Best of all, the room’s floor-to-ceiling windows offer spectacular panoramas over Baku or across the Caspian Sea.

“We are at the top of this city,” enthuses Edvena d’Souza, Director of Sales & Marketing at Fairmont Baku. “We offer guests access to a full city view, which nobody else can. Even our lowest guestroom floor is higher than any other building in the city, so you have an uninterrupted view over the city from every single room.” 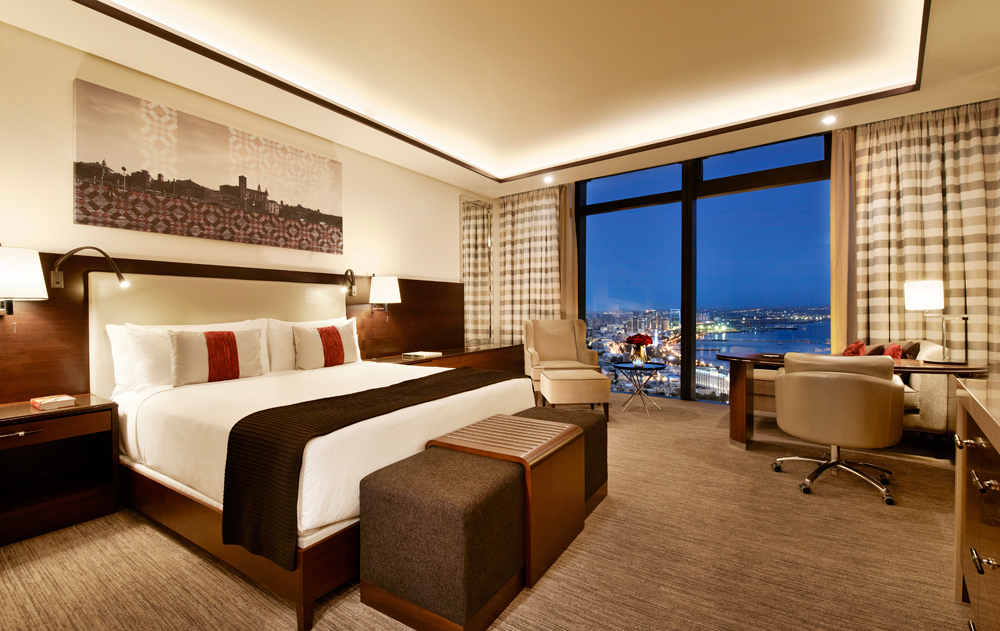 The amenities
Every room and suite within Fairmont Flame Towers is special, but the most exclusive accommodation is to be found on floors 22 to 26. Namely, the Fairmont Gold Rooms. This “hotel within a hotel” concept offers a private check-in, twice-daily housekeeping and access to the Fairmont Gold lounge, which serves food and drinks throughout the day; first breakfast, then afternoon tea, then pre-dinner hors d’oeuvres and aperitifs.

Outside of the rooms, there are also great hotel features to enjoy. There’s the vast ESPA spa, which covers a total of 1,036 square feet over two floors, and features many treatment rooms, an indoor pool, two vitality pools, a sauna, a steam room, a hammam, a yoga studio and a state-of-the-art gym. There are the bars and  restaurants, which include the steak-specialist Alov Restaurant, the French-influenced Le Bistro, the after-dark Alov Jazz Bar and the soon-to-open Cigar Divan. There are also the extensive business, meeting and function facilities, which cover more than 26,900 square feet and include two ballrooms. And to top it all off, there are the five-star services, including valet parking, expert childcare and a knowledgeable concierge.

“We have the best food and beverage in the city,” smiles Edvena. “Le Bistro is Baku’s first French restaurant – I just love the duck confit [with gratinéed mashed potatoes and green salad] – and we have others too. We also have the best service; our staff were trained in other Fairmont hotels around the world, like Dubai, for up to one-and-a-half years. This means we offer consistently high quality service, which is rare in Baku.”

The future
Baku is already home to a wealth of five-star restaurants, exclusive bars, luxury entertainment and high-end shopping, and it has far more fascinating sights in and around the city to offer than Dubai. Yet this is only the beginning. Dozens of world-class construction projects are now underway – not least Azerbaijan Tower, set to be the world’s tallest building, amid the surrounding artificial Khazar Islands – and so Baku looks destined to become one of the most popular luxury destinations in the world. And the flickering flame of the Fairmont will be standing tall throughout as Baku’s most impressive landmark, and most luxurious hotel.

If you want to read more of the articles we’ve contributed to Private Air Magazine, just click here. Or to see all of our latest projects, click here. Stay tuned to our blog for all the latest news and tip top travel writing advice.

Not enough? Then come on over to Twitter to have a chat with the World Words team. We promise we won’t bite!

All images courtesy of  Fairmont Hotels